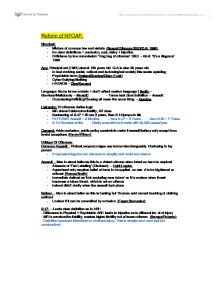 Law Com. 2 Sentences. 1) Min Life Sentence. 2) Max Life Sentence. Coutts - Can Return verdict of MS - Too much for Jury - Reform fixes this - Murder can be committed by omission, but this does not reflect the seriousness of the offence as even battery can't be committed by omission (Fagan) - When can 3rd Party Break Chain (Chesire/Jordan) Conflict with each other - When V's actions stop being self neglect (Dear/Holland) and start being daft + unexpected - Think Skull Rule unfair, attracts liability for something reasonable man could not foresee (Blaue) Self Defence: Not fair or just, as excessive use of force would lead to a full murder conviction - All or nothing - Police/Army judged to the same standard as Martin, not fair as they are acting to protect society as a whole as they may be much more 'anguished' - Judiciary cannot make separate offence for them as it is parliaments job (Clegg/Demenez) - Similar argument for reforming duress which is not a defence to murder or attempted murder (Howe/Gotts) MR of 'Malice Aforethought' is misleading as there is no need for any kind of malice or ill will - Intention for GBH should be removed (Lord Steyn) ...read more.

Reform of Intoxication. - Majewski said it was a defence to specific intent only, however the distinction between basic and specific is illogical and unfair as intoxication means abolition of MR. If you don't have MR for one crime, you should not have it for another - This undermines the basic principle of law that there must be MR - The Butler Committee in 1975 suggested an alternative approach as used in Germany where when they are not liable for a crime due to intoxication they will be liable for a separate offence of intoxication. This preserves the logic of the law and prevents people from escaping liability. - HOWEVER, this categorises a wide range of offences under one title and the public will not know what specific offence was committed - In 2009 the Law Commission suggested keeping the law largely as it is but codifying it with clearer definitions of what is basic and specific intent - Problems with involuntary intoxication include Kingston as Drunken Intent is still Intent. Prof. Clarkson argues this is unfair to convict a person when their powers of reason have been removed by a third party. - Drunken Mistakes (O'Grady/Hatton) are not a defence, although this goes against the rules of normal intoxication - Inconsistency with the way the law is dealt with in intoxication (Aitken/Richardson + Irwin) ...read more.