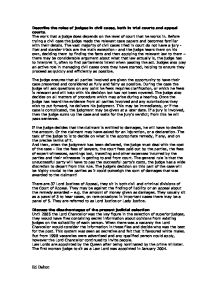 role of judges in civil cases

Describe the roles of judges in civil cases, both in trial courts and appeal courts. The work that a judge does depends on the level of court that he works in. Before trying a civil case the judge reads the relevant case papers and becomes familiar with their details. The vast majority of civil cases tried in court do not have a jury - libel and slander trials are the main exception - and the judge hears them on his own, deciding them by finding the facts and then applying the relevant law to them - there may be considerable argument about what that law actually is, the judge has to interpret it, often to find parliaments intent when passing the act. Judges also play an active role in managing civil cases once they have started, helping to ensure they proceed as quickly and efficiently as possible. The judge ensures that all parties involved are given the opportunity to have their case presented and considered as fully and fairly as possible. ...read more.

paid out by the parties, the fees of expert witnesses, earnings lost, travelling and other expenses incurred by the parties and their witnesses in getting to and from court. The general rule is that the unsuccessful party will have to pay the successful party's costs, the judge has a wide discretion to depart from this rule. The judge's decision on this part of the case will be highly crucial to the parties as it could outweigh the sum of damages that was awarded to the claimant! There are 37 Lord Justices of Appeal, they sit in both civil and criminal divisions of the Court of Appeal. They may be against the finding of liability or an appeal about the remedy awarded - e.g. the amount of money given as damages. They usually sit as a panel of 3 to hear cases, on rare occasions in important cases there may be a panel of 5. They are referred to as Lord Justice or Lady Justice. ...read more.

All other judicial appointments are made by the judicial appointments commission. There are 15 members of this commission; 6 lay members, 5 judges - 3 from the court of appeal or high court plus 1 circuit judge and 1 district judge, 1 barrister, 1 solicitor, 1 magistrate, and 1 tribunal member. Appointments are made solely on merit, the commission is responsible for assessing the merit of the candidates, no candidate can be appointed unless recommended by the commission. The Lord Chancellor has limited powers in relation to each recommendation for appointment. The powers of the Lord Chancellor have been criticised. The chairman of the commission said the system still had loopholes if anyone was determined to meddle with the merit based appointment. Positions are advertised widely in newspapers, legal journals and online. It also runs road shows to communicate and explain the appointments system to potential applicants. The commission has listed 5 qualities that are desirable for a good judge: intellectual capacity, integrity, independence of mind, sound judgement, decisiveness, objectivity, and willingness to learn, ability to understand and deal fairly, authority and communication skills, efficiency. Ed Dalton ...read more.