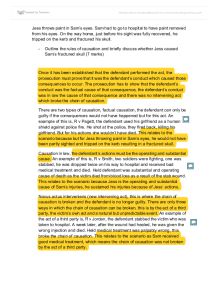 Rules of Causation Case. Jess throws paint in Sams eyes. Sam had to go to hospital to have paint removed from his eyes. On the way home, just before his sight was fully recovered, he tripped on the kerb and fractured his skull.

Held defendant was substantial and operating cause of death as the victim died from blood loss as a result of the stab wound. This relates to the scenario because Jess is the operating and substantial cause of Sam's injuries, he sustained his injuries because of Jess' actions. Novus actus interveniens (new intervening act), this is where the chain of causation is broken and the defendant is no longer guilty. There are only three ways in which the chain of causation can be broken, this is by the act of a third party, the victim's own act and a natural but unpredictable event. An example of the act of a third party is, R v Jordan, the defendant stabbed the victim who was taken to hospital. ...read more.

The thin skull rule is that you must take your victim as you find them. An example of this is, R v Blaue, the defendant stabbed a Jehovah's Witness who was told in hospital she would die if she didn't have a blood transfusion, on religious grounds she refused and died. Held the stab wound was still the substantial and operating cause due to the thin skull rule. This relates to the scenario because Sam tripped on the kerb due to the substantial and operating cause of having paint in his eyes. Jess did cause Sam's fractured skull. But for her actions of throwing paint in his eyes, he would not have tripped on the kerb. The substantial and operating cause for Sam tripping on the kerb was his partial sight caused by Jess throwing paint in his eyes. ...read more.

This is a good answer. It briefly but accurately outlines each of the rules of causation and supports each rule with relevant case authority. Each rule is accurately applied to the facts of the scenario.
It may be unnecessary to include the last two points of novus actus as they are not relevant to the scenario. Try to select relevant material, especially in a time limited situation.
Rating *****