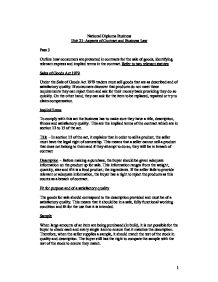 Under the Sale of Goods Act 1979 traders must sell goods that are as described and of satisfactory quality. If consumers discover that products do not meet these requirements they can reject them and ask for their money back providing they do so quickly. On the other hand, they can ask for the item to be replaced, repaired or try to claim compensation.

To comply with this act the business has to make sure they have a title, description, fitness and satisfactory quality. This are the implied terms of the contract which are in section 12 to 15 of the act.

Title – In section 12 of the act, it explains that in order to sell a product, the seller must have the legal right of ownership. This means that a seller cannot sell a product that does not belong to them and if they attempt to do so, they will be in breach of contract

Fit for purpose and of a satisfactory quality

The goods for sale should correspond to the description provided and must be of a satisfactory quality. This means that it should be in a safe, fully functional working condition and fit for the use that it is intended.

When large amounts of an item are being purchased (in bulk), it is not possible for the buyer to check each and every single item to ensure that it matches the description. Therefore, when the seller supplies a sample, it should match the rest of the stock in quality and description. The buyer still has the right to compare the sample with the rest of the stock to ensure they match.

The Supply of Goods and Services Act 1982 require traders to provide services to a proper standard of workmanship. Furthermore, if a definite completion date or a price has not been fixed then the work must be completed within a reasonable time and for a reasonable charge.

Implied Terms for the Supply of Goods and Services, Work and Material

Work must be carried out using materials of a satisfactory standard and the service should be carried out that service with reasonable care and skill and within a reasonable timescale unless there is agreement for a specific time. Any goods supplied during the course of the service should be of satisfactory quality and fit for their purpose. If this is not the case, the consumer is can ask for a repair, replacement or can attempt to claim compensation.

As with the supply of goods and services, the product for hire should be of a satisfactory, for its intended purpose and match the description provided. If a sample is used to represent the quality of the product offered, then it must also be of the same quality, match the description and may not be misrepresented in any way. If these conditions are not met they are considered as a breach of contract and consumers would be entitled to request a replacement, a repair or compensation. The remedies for these terms would be similar to those under the rest of the act.

If the terms of a contract are breached by one party, the other may suffer a loss. Where this occurs, there are various remedies which the party suffering from the other’s breach can use. Breaching a condition will allow the other party to the contract to terminate it by ‘repudiating’ it and to claim damages. Breaching a warranty will only allow a damages claim and does not bring the contract to an end.

A breach of contract is caused by a failure to perform a duty specified by the contract. The contract’s terms can be divided into conditions and warranties. These can be expressly stated or implied within the contract. A condition is something fundamental to the contract.

If one party are in breach of a contract, the other party have the right to rescind the contract and reject it (annul the contract).

“Sums of money not established in advance by the contracting parties as a compensation for a breach of contract, but determined by a court after such breach occurs.” Reword!!!

Mandatory court order to a party to fulfill its contractual obligations according to the precise terms of the contract it entered into. Courts order specific performance where monetary damages are inadequate, inappropriate, or cannot be established. It is a discretionary remedy, and may not be available in certain cases such as disputes regarding contracts of employment.

If the contract of the terms is not carried out as required, the wronged party can take specific assets of the other party in place of it – hence the term lien. For example, if a faulty car was sold to an individual – they may claim another car of the same value in lien of it.

An injunction is a court order which can be issued if it is likely that one party intend to breach a contract. It forbids the specified action from being carried out (prohibitory injunction) or it commands that something must be done (mandatory injunction). Injunctions are usually issued where it is clear that the award of damages would not be enough or may cause greater damage if the contract is allowed to be breached.

Jamal advertised the Porsche 911 for £21,000 in the local paper. This offer was open to everyone so it is considered an invitation to treat. Bob upon seeing this advert decides to make an offer of £20,000 which is a thousand pounds below the stated acceptance price.

If we look at the postal rule, it states that a letter is effective from when it is sent. An exception can be made however if the individual changes their mind and is able to communicate their latest decision using a method that is faster and will arrive before the first method. However, in this case, Jamal has failed to use a quicker method of communication and both of the letters arrived at Bob’s house at the same time.

This means that Jamal cannot accept Bob’s original offer as it has been automatically rejected when Jamal decided to communicate the counter offer through the post. It makes no difference whether he changed his mind as he failed to communicate this change of heart using a method quicker than post which would get to Bob before the letter – which is not the case. If for instance, Jamal had made a telephone call and explained his decision before Bob had received the letter through the post, the situation would have been different.

Jamal is therefore in no position to claim that that a contract has been breached as he failed to communicate his latest decision to Bob before the original letter (which contained the counter offer/rejection) arrived. This means that the postal rule applies to this situation and therefore there is no contract and Jamal cannot take any legal action against Bob.

Currently, there is a lot of debate on whether e-mail is considered an instantaneous method of communication and if it is exempt from the postal rule. However unlike fax or telex which goes directly to the recipient, e-mails does not take a direct route to the recipient. If all communication in this case was done through e-mail and we take the view that the postal rule does apply to this case, it would be more or less the same conclusion reached in the original case.

The only differences would be that Bob would receive the first email (containing the counter offer) within a matter of seconds and considering that Jamal took a day to change his mind, the second email (containing the acceptance of the original offer) a day later. Due to the near instantaneous speed at which e-mail arrives, a situation where both the emails arrived at exactly the same time would not occur as there was a one day gap between the sending of the two emails.

Requirements of a valid contract

Offer – both Jamal and Bobby showed the willingness to accept a specific set of terms and were both willing to enter into a contract before the disagreement.

Consideration – there was a consideration for both individuals, as Bobby would receive the vehicle and Jamal the agreed price if the deal went through.

Capacity - both individuals seemed to have the legal and mental capacity to enter into a contract. As far as we know, Bob or Jamal are sound mind and neither are bankrupt of underage.

Acceptance – for there the contract to be biding, there would have to be an acceptance which is complete and unconditional agreement to all the terms of the offer. While in this case Jamal tried to express his acceptance he was too late as he had already expressed his counter offer and rejection which meant that he was no longer able to make an acceptance.

Main points in this case