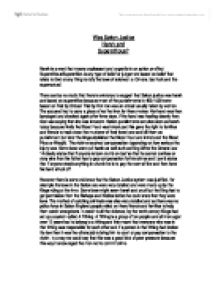 Was Saxon Justice Harsh and Superstitious? Harsh is a word that means unpleasant and ungentle in an action or effect. Superstitious/Superstition is any type of belief or judgement based on belief that relate to God or any thing to defy the laws of science i.e. Omens, bad luck and the supernatural. There can be no doubt that there is evidence to support that Saxon justice was harsh and based on superstition because most of the punishments in 400-1500 were based on Trial by Ordeal. Trial by Hot Iron was an ordeal usually taken by women. The accused had to carry a piece of red hot iron for three metres. Her hand was then bandaged and checked again after three days, if the hand was healing cleanly then God was saying that she was innocent. Saxon punishments are also seen as harsh today because firstly the Blood Feud was introduced this gave the right to families and friends to ...read more.

Some laws might seem harsh and cruel but the King had to get permission from the Bishops and Nobles before he could state that they were laws. The method of catching criminals was also very detailed and as there was no police force in Saxon England people relied on there friends and families to help them catch wrongdoers. In result to all the violence, by the tenth century Kings had set up a system called A Tithing. A Tithing is a group of ten people and all men aged over 12 years had to belong to a tithing and this meant that everyone who was in that tithing was responsible for each other and if a person in that tithing had broken the law then it was the others job to bring him to court or pay compensation to the victim. ...read more.

of view when we ask and answer questions about the past and that we should also think about what it was like in the Saxon period, maybe the violence and crime was so bad that the King had to take the decisions about trial and ordeal, maybe the King didn't want to introduce the death penalty but had to because of the way the people in his kingdom were behaving but on the other hand I do think some Saxon laws and punishments were a bit extreme and most trial by ordeals were based on superstition such as Trial by cold water. This trial was taken by men. People believed that water was pure and would reveal truth so the accused was lowered into the water on the end of a rope and if the person sank and the knot went below the surface the accused was innocent but if the accused stayed above the surface he was guilty. ...read more.