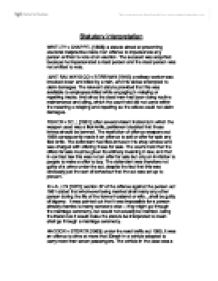 Statutory interpretation WHITLEY v CHAPPEL [1868]: a statute aimed at preventing electoral malpractice made it an offence to impersonate any person entitled to vote at an election. The accused was acquitted because he impersonated a dead person and the dead person was not entitled to vote. L&NE RAILWAYS CO v BERRIMAN [1946]: a railway worker was knocked down and killed by a train, and his widow attempted to claim damages. The relevant statute provided that this was available to employees killed while engaging in relaying or repairing tracks. And since the dead man had been doing routine maintenance and oiling, which the court held did not come within the meaning o relaying and repairing so the widow could not claim damages. FISHER v BELL [1961]: after several violent incidents in which the weapon used was a flick-knife, parliament decided that these knives should be banned. ...read more.

It was pointed out that it was impossible for a person already marries to marry someone else - they might go through the marriage ceremony, but would not actually be married. Using the literal rule it would make the statute be interpreted to mean shall go through a marriage ceremony. MADDOX v STORER [1963]: under the road traffic act 1960, it was an offence to drive at more that 30mph in a vehicle adapted to carry more than seven passengers. The vehicle in the case was a minibus made to carry seven passengers, rather than altered to do so, and the court held that adapted to could be taken to mean suitable for. SMITH v HUGHES [1960]: the street offences act 1958 made it a criminal offence for a prostitute to solicit potential customers in a street or public place. ...read more.

ROYAL COLLEGE OF NURSING v DHSS [1981]: the 1967 abortion act stated that termination of pregnancy was legal only if performed by a registered medical practitioner. By 1972, surgical abortions were largely being replaced by drug induced ones, in which the second stage of the process was carried out by nurses, under the instructions of a doctor. The House of Lords ruled that the mischief, which the act sought to remedy, was the uncertain state of the previous law, which drove many women to dangerous back-street abortionists. It sought to do this by widening the grounds in which abortions could be obtained, and ensuring that there were carried out with proper skill in hygienic conditions and the procedure in question promoted this aim, and was not unlawful. It was a controversial with Lords Wilberforce and Edmund Davies claiming that the House was not interpreting legislation but rewriting it. ...read more.