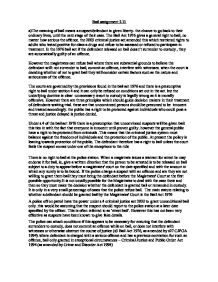 The Bail Act 1976 gives a general right to bail, no matter how serious the offence. the 2003 criminal justice act amended this which restricted rights to adults who tested positive for class a drugs and refuse to be assessed or refused to participate in t

Bail assignment 2.11 a)The meaning of bail means a suspect/defendant is given liberty- the chance to go back to their ordinary lives, until the next stage of their case. The Bail Act 1976 gives a general right to bail, no matter how serious the offence. the 2003 criminal justice act amended this which restricted rights to adults who tested positive for class a drugs and refuse to be assessed or refused to participate in treatment. In the 1976 bail act if the defendant released on bail doesn't surrender to custody , they are automatically guilty of an offence. However the magistrates can refuse bail where there are substantial grounds to believe the defendant will: not surrender to bail, commit an offence, interfere with witnesses. when the court is deciding whether of not to grant bail they will consider certain factors such as the nature and seriousness of the offence. The courts are governed by the provisions found in the bail act 1976 and there is a presumptive right to bail under section 4 and it can only be refused on conditions set out in the act. but the underlying doctrine is clear -unnecessary resort to custody is legally wrong as it is morally offensive. ...read more.

Condition that are imposed by the courts to prevent suspects from not surrendering to court a few examples of these would be asking the suspect to surrender their passport to stop then from running away to another country, to report regularly to the police station to endure that that there trustworthy to be on bail and get another person to stand surety for them. Where an adult offender has tested positive for certain Class A drugs s19 of the Criminal Justice Act 2003 places restrictions on the granting of bail, where the defendant is believe to have taken drugs which was the caused or contributed to the offence and the defendant has refused to agree to an assessment regarding their dependency upon certain class a drugs A good way courts try to refute defendant from not surrendering to bail is sureties. A surety is a person ho is prepared to pay a significant amount of money to the court if the defendant fails to attend court. A surety cannot have a criminal record and would need to provide proof that necessary funds are available such as bank statements b)Only two applications of bail can be made, as it each process will cost time-as applications as to be thoroughly examined ...read more.

Prisoners have to fed and treated accordingly as the defendant have a fundamental human right that they are innocent until proven guilty and so should;d be treated better than a convicted criminal. These would include such things as getting more phone calls to family and friends ,the cost of one person isn't a lot but with thousands of people brought in each week it can cut a considerable amount of expenses. The major disadvantage that the state might face when granting bail is that the defendant may never come back, going on the run or fleeing the country. Although they get paid the bail amount from sureties there may be a dangerous criminal on the loose. In the long run this may also waste government spending trying to track down the individual. Many feel it would be safer to keep everyone detained. The advantages for the government and police on remand is that it looks good on them that there are trying to keep the public safe and thuis giving them a good image,that advantage of remand on the defendant is that it may keep the public safe if the defendant ids considered to be dangerous harm ...read more.