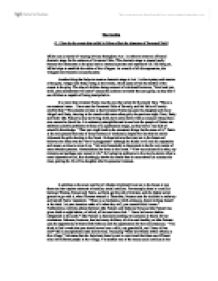 The Crucible Q. \ How do the events that unfold in Salem affect the character of Reverend Hale? Miller uses a myriad of varying devices throughout Act 1 in order to create an effectual dramatic stage for the entrance of Reverend Hale. This dramatic stage is created partly because the characters in the play lead an intensely puritan and repressed life. By doing so, Miller helps to establish the ethics of the villagers. As a result of all this repression, the villagers have become unusually petty. Another thing that helps to create a dramatic stage in Act 1 is the mystery and tension of the girls, Abigail and Betty, being in the woods, which starts off all the trouble of the events in the play. The idea of children being accused of witchcraft however, "Now look you, child, your punishment will come" causes the audience to doubt they are guilty, as they don't see children as capable of being manipulative. It is ironic that reverend Parris was the one that called for Reverend Hale. "There is no unnatural cause...I have sent for Reverend Hale of Beverly, and Mr Hale will surely confirm that." The situation to date is that Reverend Parris has seen his daughter and niece: Abigail and Betty, dancing in the woods with some other girls, the previous night. Now, Betty and Ruth: Mrs Putnam's only surviving child, have come down with an unusual illness that a cure cannot be found for. ...read more.

As at the end of act II Hale had complete confidence in it, Hale rapidly looses this confidence throughout the act. Constantly, it seems, in this act, Hale is trying to change the opinions of the court, he does this by trying to get the people of Salem to question the honesty of the witnesses, as it becomes rapidly clear that they cannot all be telling the truth. Hale keeps coming up with sensible alternatives to witchcraft, more simple explanation to explain the goings on." This child claims the girls are not truthful, and if they are not- " The audience, much like Hale are hopeful for Hales' success and victory, yet it becomes clear that the court has a trust in the accusers and only aggression towards those who are being accused. The court are only believing what they want to believe. It becomes quite clear to the reader that Hale cannot win this case as the court themselves are working against him. At this point, Proctor's words towards Hale, nearing the end of the last act, seem to make sense infinitely; " And why not, if they must hang for denyin' it? / There are them that will swear to anything before they'll hang; have you ever thought of that?" This is the main point in the courts proceedings: the court need the accusers to confess their sins, as without this they have no reason to carry on, they have no way of telling if the accusers are telling the truth or not. ...read more.

This is yet another example of the innocent becoming the accused and vice versa. Justice is lost once again. We can imagine that Hale is becoming increasingly tense and aggravated, as he is just as powerful as an onlooker. He knows what is going on, but can do nothing about it. Hale, trying to prove his point, brings up the point that the villagers are in fear of the court, so will not speak. However, Danforth simply, ironically replies:"No uncorrupted man may fear this court." At the present point it is clear that we have to question the reassuring and positive language of the court: its actions greatly conflict with its ideology. Hale makes another bid to take the courts attention back to the case." I think this goes to the heart of the matter." Hale continues to try and protect both Mary Warren and Proctor," send him home and let him come again with a lawyer" but this backfires. Hale is trying to protect Proctor but at the same time he is giving the court an excuse to accuse him of ulterior motives, thus harming his case more than helping it. As the case goes on, more webs of lies, cover-ups and briberies develop. The case becoming exceedingly more like a carefully planned pantomime, rather than a case to uncover the truth. This infuriates Hale to the point that he accepts defeat and denounces the case, " I denounce these proceedings, I quit this court." This is where we are left as the curtain falls to signify the end of Act III. ...read more.