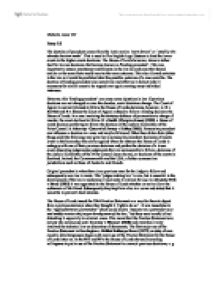 The doctrine of precedent comes from the Latin maxim stare decisis or stand by the already decision made. This is used in The English Legal System to bind the lower courts to the higher courts decisions.

Michelle Jones VIT Essay 2:3 The doctrine of precedent comes from the Latin maxim 'stare decisis' or 'stand by the already decision made'. This is used in The English Legal System to bind the lower courts to the higher courts decisions. The House of Lords however, chose to tether itself to its own decisions that became known as 'binding precedent'. This was important to ensure consistency and fairness in the law as each case that shared similar or the same facts would receive the same outcome. This also allowed certainty in the law as it could be predicted what the possible outcome of a case could be. The doctrine of binding precedent also saved time and effort as it did not make it necessary for similar cases to be argued over again creating many individual instances. However, this 'binding precedent' can cause some injustices in law if previous decisions are not changed as over the decades, social doctrines change. The Court of Appeal is normally bound to follow the House of Lords decisions, however, in R v Karimi and R v James the Court of Appeal refused to follow a binding decision the House of Lords. In a case involving the statutory defence of provocation to charge of murder, the court declined to follow R v Smith (Morgan James) [2000] a House of Lords decision preferring to follow the decision of the Judicial Committee of the Privy Council in Attorney- General of Jersey v Holley [2005]. Persuasive precedent can influence a decision in a case and may be followed. Other then obiter dicta (other things said) the following may give rise to persuasive precedent: decisions of courts lower in the hierarchy, this can be applied when for instance the House of Lords is unhappy with one of their previous decisions and prefers the decision of a lower court; dissenting judgements-judgements that are unreasonable to follow; decisions of the Judicial Committee of the Privy Council (seen above); or decisions of the courts in Scotland, Ireland, the Commonwealth and the USA, of other common law jurisdictions such as those of Australia and Canada. ...read more.

In the 80's and 90's the House of Lords showed increasing willingness to put in use of the Practice Statement to overrule previous decisions, e. g in R v Shivpuri [1986] overruled its decision in Anderton v Ryan [1985] on the basis that in both cases the individual had attempted to do something impossible. Another important use of the Practice statement was in R v R [1991] where it was held that r**e within marriage is a crime and overturned a legal principle that had stood for centuries. This is an example where judicial Precedent can be used to develop and evolve law so that it fits to societies' circumstances and becomes more relevant for use, especially with the use of the Practice Statement that 'updates' law. The Court of Appeal, Civil and Criminal divisions are bound by the House of Lords. The Civil Division is usually bound by its own previous decisions, but there are for four exceptions to this were; the previous decision was made in ignorance of a relevant law (it is said to have been made per incuriam); where there are two conflicting decisions or later were there are conflicting House of Lord's decisions; a proposition of law was assumed to exist by an earlier court and was not subject to argument or consideration by court. The first three exceptions were laid down in Young v Bristol Aeroplane Co Ltd [1964]. The fourth was added by R (on the application of Kadhim) v Brent London Borough Housing Benefit Review Board [2001]. In the Criminal Division, the results of cases heard may decide whether or not an individual goes to prison, so the Criminal Division takes on a more flexible approach to its previous decisions and does not follow them where doing so could cause injustice. Judges can avoid an awkward precedent based on the case's facts- arguing that the case under consideration are different in some important way from those of the previous case, and therefore the rule laid down does not apply to them. ...read more.

Where each judge in the former case has given a different reason for coming to the same decision, or where, for example, two judges from the House of Lords take on view, two more another, and the fifth agrees with none of them, it can then be argued that there is no ratio decidendi for the decision. By stating that a previous case was made per incuriam- that it failed to acknowledge relevant law (a statute or precedent)-this is used very rarely as it undermines the status of the courts below. Courts can argue that a precedent is outdated and is no longer in step with modern thinking this best approach to this was in R v R [1991] overturning a centuries old common law rule that r**e within marriage was not a crime. Higher courts can avoid precedent by overruling or reversing cases. Overruling can occur when the legal principle of a lower court is overturned by a higher court in a subsequent case. It can, in the case of the House of Lords, overrule its own decisions made in an earlier different case. In Hedley Byrne v Heller & Partners [1964] a case involving negligent misstatement, the House of Lords overruled a decision in the Court of Appeal decision in Candler v Crane, Christmas & Co. [1951] and in R v Shivpuri [1986] the House of Lords overruled its own earlier decision in Anderton v Ryan [1985]. Reversing is when a decision of a lower court is appealed to a higher one, the higher court may change it if they feel the lower court has wrongly interpreted or applied the law. When a decision is reversed so is the lower court's statement on the law. For example in Anderton v Ryan [1985] the House of Lords reversed the decision of the Court of Appeal when Mrs Ryan's conviction of handling stolen goods was upheld and was made invalid by the House of Lords. Word Count (without header and footer): 1,489 ...read more.