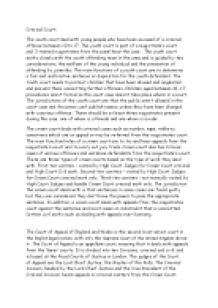 ﻿Criminal Court: The youth court deal with young people who have been accused of a criminal offence between 10 to 17. The youth court is part of a magistrate?s court and 3 trained magistrates from the panel hear the case. The youth court works closely with the youth offending team in the area and is guided by two considerations, the welfare of the young individual and the prevention of offending by juveniles. The main functions of a youth court are to determine a fair and restorative sentence or disposition for the youth defendant. The Youth court needs to protect children that have been abused and neglected and prevent them committing further offences. Children aged between 10 -17 procedures aren?t formal as the court case doesn?t take place where in a court. The jurisdictions of the youth court are that the public aren?t allowed in the court case and the press can?t publish names, unless they have been charged with a serious offence. There should be at least three magistrates present during the case, one of whom is a female and one whom is a male. The crown court deals with criminal cases such as murder, rape, robbery, sometimes which are on appeal or may be referred from the magistrates court. The main function/roles of a crown court are to try and hear appeals from the magistrate?s court and to carry out jury trials. Crown court also has to hear cases of serious offences and sentence defendants from the magistrate?s court. There are three types of crown courts based on the type of work they deal with. ...read more.

Family divisions hear cases involving marriages, divorce, children and family property. The divisional court hears appeals from county courts and the magistrates? court. The Criminal Cases Review Commission (CCRC) was set up in March 1997 by the Criminal Appeal Act 1995.The Criminal case review commission purpose is to review possible miscarriages of justice in the criminal courts of England, and refer appropriate cases to the appeal courts. The Commission is based in Birmingham and has about 90 staff, including a core of about 50 caseworkers, supported by administrative staff. They are completely independent and unbiased and do not represent the prosecution or the defence. To improve confidence in the criminal justice system, and bring justice to those wrongly convicted, and based on their experience to contribution to reform and improvements in the law. The criminal case review should investigate cases as quickly as possible and with thoroughness and care and work constructively with our stakeholders and to the highest standards of quality. They treat applicants with civility, respect and consideration. Civil Court: Small claims court is a legal court to determine disputes involving small amounts of money in a quick manner. The main role and functions of a small claim court is to provide a low-cost, fast and simple way for clients to resolve disputes between themselves without having a solicitor present. They have to present the evidence and have their perception on the dispute. Then the small claim court must makes a decision based on the evidence. A small claim court deals with clients who make the following complaints on faulty goods or bad workmanship. ...read more.

A lot of civil cases are dealt with in the county court. County courts standard court structure. These courts function as a "middle ground" between minor and appellate courts, handling several case types in different circumstances. The county court deals with traffic and municipal ordnance violations, preliminary hearings. The purpose of the county court is for them to reach a decision whether the defendant is guilty or not of the crime for example the defendant may owe money to a businesses and the crown court may decide weather not the defendant has to pay it back or not. The jurisdiction of the county court is that all claims personal injuries and losses are irrespective of the amount claimed. County court is appeals can?t be made once the county court has decided. The difference is the type of jurisdiction they exercise. "First instance" courts, or courts of original jurisdiction, are trial courts that determine guilt or innocence. In criminal cases, the defendant has a constitutional right to a jury trial, but may choose a bench trial. The jury are "finders of fact" who determine the credibility of witnesses and evidence, and decide whether the prosecution has proven it's case. Criminal trial courts issue guilty or not guilty verdicts (and variations thereof) on the charges under consideration. Appeals courts have appellate influence. They only hear cases were the losing party alleges a problem occurred in the trial that could have resulted in an unfair or wrong verdict. Appeals courts use a panel of judges (often three) in place of a jury, and do not consider trial evidence in their decision. They automatically stipulate the facts of the case being reviewed are valid, and only rule on serious procedural errors or determine whether an issue or issues in the case conflict with state/federal or constitutional law. ...read more.