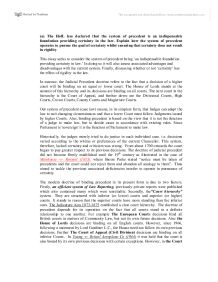 (a) The HofL has declared that the system of precedent is an indispensable foundation providing certainty in the law. Explain how the system of precedent operates to pursue the goal of certainty whilst ensuring that certainty does not result in rigidity This essay seeks to consider the system of precedent being 'an indispensable foundation providing certainty in law.' In doing so it will also assess associated advantages and disadvantages with the current system. Finally, discussing whether or not 'certainty' has the effect of rigidity in the law. In essence, the Judicial Precedent doctrine refers to the fact that a decision of a higher court will be binding on an equal or lower court. The House of Lords stands at the summit of this hierarchy and its decisions are binding on all courts. The next court in the hierarchy is the Court of Appeal, and further down are the Divisional Courts, High Courts, Crown Courts, County Courts and Magistrate Courts. Our system of precedent (case law) means, in its simplest form, that Judges can adapt the law to suit changing circumstances and that a lower Court must follow Judgments issued by higher Courts. Also, binding precedent is based on the view that it is not the function of a judge to make law, but to decide cases in accordance with existing rules. ...read more.

In assessing the Courts approach of interpreting statutes it is imperative to acknowledge once a Statute or other legislation is enacted, it is the law and the Courts must follow it. There is no problem in this if the legislation is clear and unambiguous. But in instances where this is not the case it is often necessary, therefore, for a piece of legislation to be interpreted by the Courts referred to as Statutory Interpretation. Therefore there are either internal aids to interpretation which are found within the act itself or external aids which include things such as dictionaries, the interpretation Act 1978, EC directives etc... In the case of Pepper -v- Hart (1993), the House of Lords decided that to aid interpretation the Courts can take reports of Hansard into account in respect of debates, questions asked in the house and other matters appertaining to ambiguous legislation. In addition to the several aids that Judges have to assist them, the Courts follow a number of presumptions. So, the presumption will stand unless it can be contradicted by express legislation, and the burden of proof is upon the party seeking to disapply such presumption. These presumptions apply whether the legislation is primary or delegated and may include for example; the presumption of the construction of penal provisions, if the ambiguity or doubt applies to a criminal or penalty provision, then the individual will get the benefit of the doubt. ...read more.

However, Lord Simmons, in the House of Lords, has said that "if a gap is disclosed, then the remedy lies in an amending Act", indicating that it is up to Parliament to say what it means. These two approaches - the rigid approach and the flexible approach are respectively called "the literal approach" and the "purposive approach". The European system favours the latter. (c) To what extent has membership of the EC restricted the freedom of the Courts as regards statutory interpretation? In assessing the extent to which membership of the EC has restricted the freedom of the courts in relation to statutory interpretation it is imperative to point out that EC legislation is impinging upon our nation. At present, EC law has superiority to our own national laws and takes precedence over it in matters of community law. The way in which community law may restrict the freedom of the courts in interpreting statutes can be specifically shown since national courts must follow EC law where it applies. Thus where there is ambiguity in a piece of European legislation the national courts can not interpret that piece of legislation. Under Article 144 of The Treaty of Rome, only the European Court can interpret EC legislation. If our Courts, therefore, come across a piece of EC legislation that needs interpreting, then they have to remit it to the European Court for a ruling on its meaning. ...read more.

Summary:This is a general explanation of rules of precedent and statutory interpretation. The whole essay could have benefited from greater use of case illustration.
Rating:***