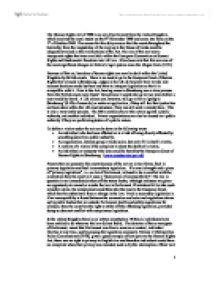 The Human Rights Act of 1998 is an act of parliament from the United Kingdom, which received the royal assent on the 9th November 1998 and came into force on the 1st of October 2000.

The Human Rights Act of 1998 is an act of parliament from the United Kingdom, which received the royal assent on the 9th November 1998 and came into force on the 1st of October 2000. The reason for this delay was so that the courts throughout the hierarchy, from the magistrates all the way up to the House of Lords could be adequately trained in the ramifications of the Act. The aim of this act was to incorporate rights that were available within the European Convention on Human Rights and fundamental freedoms into UK law. It has been said that this was one of the most significant changes to Britain's legal system since the Magna Carta (1215). Because of this act, breaches of human rights can now be dealt within the United Kingdom by British courts. There is no need to go to the European Court of Human Rights that is based in Strasbourg. Judges in the UK do however have to take into account decisions made by them and have to interpret legislation so that it is compatible with it. Prior to the Act, hearing cases in Strasbourg was a slow process. Even the British courts were faster! Sometimes it would take up to two years before a case would be heard. A UK citizen can, however, still go as far as 'going to Strasbourg' (0.5% of cases do) or make an application, if they still feel that justice has not been done within the UK court structure. ...read more.

In the times of terror since the September 11th atrocities, there has been much publicised opposition from citizens within certain communities in Britain, of the lack of human rights and other issues because of the Terrorism Act 2000. A major issue has been the government's policy to indefinitely detain non-UK citizens without any charge. In December 2004 the law lords ruled that this was in fact unlawful. Just over a year since the Human Rights Act came into force, the government opted out of Article 5 of the Convention on Human Rights. The government had to declare a state of emergency (although the then home secretary David Blunkett only declared a 'technical' emergency) to comply with the rules for opting out. Although detained, the 'prisoners' were in fact free to leave at any time - providing they left the UK. The main issues for many of the detainees was that many of them did not feel that they were free to go back to their home countries through fear of persecution or even death. So the usual principles of the Criminal Justice System and the 'reasonable' amount of suspicion needed for an arrest compared to a possible lifetimes detention under the Terrorism Act has now received a massive blow. It has to be asked if things have gone too far, has the Human Rights Act began to protect the guilty and not the victim? It was questioned if the Home Secretary was correct as a politician to have the final say on the length of life sentences and if this had an affect on the right to a fair trial. ...read more.

The principles of human rights alone cannot relieve certain social issues, such as poverty, however it provides respect and dignity rather than the degradation that can accompany it. The rights provided for under the human rights act are guaranteed for everyone, although there are vulnerable people in our society who require this protection more, those with disabilities, the young and the elderly. People who may be living within certain institutions due to their age, disability or mental state may be in particular need of this protection. Many of these people may not even be able to gain access to the services that can provide the help they need. To conclude, the purpose of the human rights legislation is also to act as a preventative measure, not just to remedy issues after they have occurred. It sets a standard and structure in all of our lives, without many people even realising it, as citizens, employees and employers. It installs a culture of respect for people's human rights; in institutions where standards are not met they can be held accountable for it. Whilst in the main, the Human Rights Act does seem to provide a satisfactory amount of protection for the regular citizen, however, friction will, it seems, inevitably at times continue to cause problems where society feels that the wrong people are in receipt of it. It must be hard to find a fair balance between the rights of an individual and the wishes of a community. 1 ...read more.