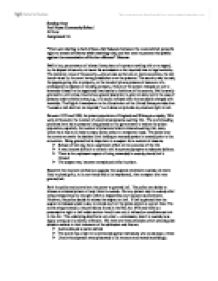 &quot;The Law relating to bail strikes a fair balance between the unconvicted person's right to remain at liberty while awaiting trial, and the need to protect the public against the commission of further offences&quot; Discuss.

"The Law relating to bail strikes a fair balance between the unconvicted person's right to remain at liberty while awaiting trial, and the need to protect the public against the commission of further offences" Discuss. Bail in law, procurement of release from prison of a person awaiting trial or an appeal, by the deposit of security to insure his submission at the required time to legal authority. The monetary value of the security-known also as the bail, or, more accurately, the bail bond-is set by the court having jurisdiction over the prisoner. The security may be cash, the papers giving title to property, or the bond of private persons of means or of a professional bondsman or bonding company. Failure of the person released on bail to surrender himself at the appointed time results in forfeiture of the security. Bail is usually granted in a civil arrest. Courts have greater discretion to grant or deny bail in the case of persons under criminal arrest, e.g., it is usually refused when the accused is charged with homicide. ...read more.

The courts are governed by the provisions found in the Bail Act 1976 and there is a presumptive right to bail under section 4 and it can only b refused on conditions set out in the Act. The underlying doctrine is very clear - unnecessary resort to custody is as legally wrong as it is morally offensive. But there are three principles which should guide decision makers in their treatment of the defendant and this are: > Justice delayed is justice denied > The public has a right to be protected against individuals who could pose a threat > Unconvicted person must presumed to be innocent and treated accordingly. The presumption under section 4 Bail Act 1976 is that unconvicted suspects will be given bail. This ties in with the fact that everyone is innocent until proven guilty. The court will also consider whether the accused should be kept in custody for their own protection or will not grant bail where the accused is already serving a prison sentence or where there has been insufficient time to obtain information as to the criteria for bail. ...read more.

The CJPOA 1994 was partly aimed at cracking down on bail bandits. It states that no bail will be granted to suspects who offend whilst on bail. It has been estimated that 25% of offenders commit offence whilst on bail. But it is very necessary to crackdown on the bail bandits as they are endangering the public and making a mockery of the law but it does increase the prison population. There are a number of problems with the bail system such as: > A high number of those refused bail are acquitted > Many are eventually given non-custodial sentences > Too many people are being held in custody > Periods of remand are too high. But there have been several initiatives proposed and some implemented to assist the system such as: > Bail Support Schemes: they are set up to offer advice, counselling and surveillance to those who are granted bail > Bail Hostels: these are run by the probation service and offers accommodation for defendants awaiting trial. This gives the defendant freedom, whilst at the same time supervision. > The government are currently preparing a Criminal Justice Bill, which would Further restrict the use of bail. Sundeep Kaur Pool Hayes Community School A2 Law Assignment 3.6 ...read more.