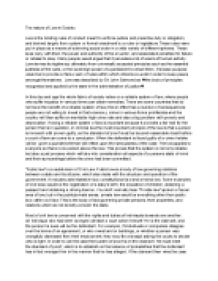 The Nature of Law in Society

The nature of Law in Society Law is the binding rules of conduct meant to enforce justice and prescribe duty or obligation, and derived largely from custom or formal enactment by a ruler or legislature.These rules were put in place as a means of achieving social order in a wide variety of different spheres. These laws carry with them the power and authority of the en-actor, and associated penalties for failure or refusal to obey. Many people would argue that it pervades a lot of area&#39;s of human activity.  Law derives its legitimacy ultimately from universally accepted principles such as the essential justness of the rules, or the sovereign power of a parliament to enact them. It&#39;s basic purpose would be to provide a frame work of rules within which citizens co-exist in order to keep peace amongst themselves.  Law was described by Sir John Salmond as �the body of principles recognised and applied by the state in the administration of justice�. In this day and age the whole fabric of society relies on a reliable system of law, where people who suffer injustice in various forms can obtain remedies. There are some countries that do not have the benefit of a reliable system of law, this in effect has a number of consequences: people are not willing to invest in that economy; crime in various forms proliferates and the country will then suffer an inevitable high crime rate and also a big problem with poverty and depravation. Having a reliable system of law is important because it provides a fair trail for the person that is in question, in criminal law the most important principle of the law is that a person is innocent until proven guilty, so the standard of proof must be beyond reasonable doubt before a court of law can come to a conclusion. When the defendant is found guilty of a crime he/she will be  given a punishment that will reflect upon the seriousness of the case. ...read more.

Report supported Professor Hart�s view that law and morality should be separate, however, various cases decided since the report show that judges are imposing their moral views in their judgements, such as in the case of R v Brown (1994), the defendants had willingly consented to sado-masochistic practices, and none of them had complained to the police. Nevertheless, they were prosecuted, and convictions were upheld based on public policy to defend the morality of society. The law is therefore seen to attempt to uphold what it considers to be public morality, even if some may dispute the correctness of that moral code.This is a contrast to the case of R v Wilson (1996), At her request D branded his initials on his wife�s b******s with a hot knife. The scars led to him being charged with ABH and  held his conduct amounted to �tattooing� and that it was not in the public interest to impose a criminal sanction, still showing that the public and their moral views still influence our law. The differing approaches in these cases clearly show that judges are letting their own moral values affect their judgements.The courts often find themselves at the centre of hugely difficult moral decisions involving life and death. They are often forced to decide between individual rights and moral codes. In the case of Shaw v DPP [1962] Shaw published a &#39;ladies directory&#39; which listed contact details of prostitutes, the services they offered and n**e pictures. Which he was then going to sell to the public for a fee.  He was convicted of conspiracy to corrupt public morals, living on the earnings of prostitution and an offence under the Obscene Publications Act 1959. The appellant appealed on the grounds that no such offence of conspiracy to corrupt public morals existed. The appeal was dismissed. The House of Lords in effect created a new crime. Lord Reid said "Even if there is still a vestigial power of this kind it ought not, in my view, to be ...read more.

where the interests of juveniles or the protection of the private life of the parties so require, or to the extent strictly necessary in the opinion of the court in special circumstances where publicity would prejudice the interests of justice. 2) Everyone charged with a criminal offence shall be presumed innocent until proved guilty according to law. 3) Everyone charged with a criminal offence has the following minimum rights: (a)to be informed promptly, in a language which he understands and in detail, of the nature and cause of the accusation against him; (b)to have adequate time and facilities for the preparation of his defence; (c)to defend himself in person or through legal assistance of his own choosing or, if he has not sufficient means to pay for legal assistance, to be given it free when the interests of justice so require; (d)to examine or have examined witnesses against him and to obtain the attendance and examination of witnesses on his behalf under the same conditions as witnesses against him; (e)to have the free assistance of an interpreter if he cannot understand or speak the language used in court. To conclude, in order for us to understand the true nature of law in society, we must fully develop our understanding of where the current societies moral standing is. In essence a law that was deemed a right decison in a case that was decided years ago does not make it right in the current time. For example the case of marital r**e would have been thought to be a very easy decion as the people in those times believed that as soon as the female partner had given consent to marry the male she had automatically submitted herself to s****l acts with her partner weather she wanted them or not. However in this day and age this law has been deemed wrong and has been changed and the law of marital r**e had been put in place to reflect the change in socieites moral views. ...read more.