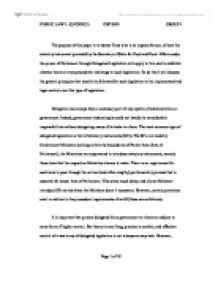 The purpose of this paper is to advise Tony who is an organic farmer, of how the statutory instrument provided by the Secretary of State for Food and Rural Affairs under the power of Parliament through Delegated Legislation will apply to him and to establish whether there are any grounds for challenge to such legislation. To do this I will discuss the general principles that need to be followed for such legislation to be implemented and legal control over this type of legislation. Delegation has always been a necessary part of any system of administration or government. Indeed, government today simply could not handle its considerable responsibilities without delegating many of its tasks to others. The most common type of delegated legislation is that of statutory instruments (SI's). The SI's are made by Government Ministers working within the boundaries of Parent Acts (Acts of Parliament); the Ministries are empowered to introduce statutory instruments, namely those laws that the respective Ministries choose to make. There is no requirement for such laws to pass through the normal (and often lengthy) parliamentary process that is essential for actual Acts of Parliament. ...read more.

It was established in Aylesbury Mushrooms Ltd4, the essence of "consultation" is the communication of a genuine invitation to give advice, and the mere sending of a letter, which is not received, is not sufficient. It was held, that there had been no consultation, merely an attempt to consult, and the consultation with the MGA was deemed to be ineffective, therefore the order had no application to persons which were effected by the SI. It is therefore submitted that although the Minister has failed to consult a body that is representative of the area affected, there is no legal requirement to consult when making the SI5. Failure to Publish: occurs when the Minister introducing the SI has failed to publish and notify the area affected. Prior to the Statutory Instruments Act (SIA)6, a failure to notify under the parent act was held to be merely directory in nature7. However, it would only come into operation when the person charged with infringing it had knowledge of the provisions under the SI8. Tony can make a statutory challenge to the SI under the SIA 1946. The SIA 1946 makes specific provisions for the publication of the SI, in s 2(1). ...read more.

In A-G v Wilts Dairies15, it was established that an SI has no power to impose a tax unless it is stated expressly in the parent Act. It is clear from the facts that the parent Act (Organic Vegetables Act) has not expressly stated such a provision. It is therefore submitted that the instrument has acted beyond its power. Furthermore, the provision of an annual licence and production quotas may be challenged on the grounds that it conflicts with the parent Act. The purpose of the Act was to 'encourage the production and sale of organic vegetables', and the introduction of such provisions under the SI can be seen to be contrary to the Act, which will void the SI. In conclusion, it is stressed that there is a great deal of uncertainty as to the procedural requirements of an SI. Although certain provisions exist under SIA 1946, these provisions may be seen as directory in application by the courts. However, in view of the above arguments and the fact that the SI will affect Tony's livelihood, it is submitted that there is a reasonable chance that a court will hold the instrument to be unlawful and unreasonable. A quashing order has never been used to control delegated legislation, but if the instrument was found to be unlawful, a declaration to that effect would be granted. ...read more.