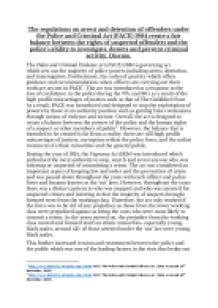 The regulations on arrest and detention of offenders under the Police and Criminal Act (PACE) 1984 create a fair balance between the rights of suspected offenders and the polices ability to investigate, detects and prevent criminal activity. Discuss.

﻿The regulations on arrest and detention of offenders under the Police and Criminal Act (PACE) 1984 create a fair balance between the rights of suspected offenders and the police?s ability to investigate, detects and prevent criminal activity. Discuss. The Police and Criminal Evidence Act (PACE) 1984 is governing act which sets out the majority of police powers including arrest, detention, and interrogation. Furthermore, the codes of practice which offers guidance and recommendations when officers are carrying out there work are set out in PACE[1]. The act was introduced as a response to the loss of confidence in the police during the 70?s and 80?s as a result of the high profile miscarriages of justices such as that of The Guildford Four. As a result, PACE was introduced and designed to stop the exploitation of powers by those in an authority position such as gaining false confessions through means of violence and torture. Overall, the act is designed to create a balance between the powers of the police and the human rights of a suspect or other members of public[2]. However, the balance that is intended to be created is far from a reality, there are still high profile miscarriages of justices, corruption within the police force, and the unfair treatment of ethnic minorities and the general public. ...read more.

Therefore, the balance that is aimed to create through PACE is still in the favour of the police who could use this power to arrest a suspect based on personal prejudices and feelings. [5] Furthermore under s.44 of the Terrorism Act (2000), the police can carry out random stop and searches without any grounds for suspicion through the Home Secretary who clandestinely authorises the police to do so in a bid to fight against terrorism. These powers have been used extensively since 2001 with the legality of this case being questioned in the case of R (on the application of Gillan) v Commissioner of Police for the Metropolis (2006) where two students, who were attending a peace demonstration against the arms fair in London, were stopped and searched by the police who used the Terrorism Act (2000) as their defence. The students appealed that the act was only created in order to be used is exceptional circumstances and for short periods of time. The House of Lords rejected this appeal however, and concluded that the laws and the circumstance in which the law was used were legal. However, this was further debated in the annual report of Lord Carlile in 2005 who pointed out that there are clear, potential dangers in granting the police extra powers such as those under the Terrorism Act (2000). ...read more.