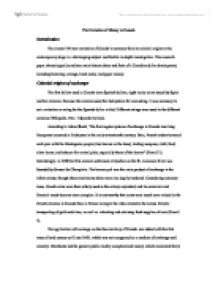 THE STATE OF GLOBAL GOVERNANCE ON TERRORISM

The Evolution of Money in Canada Introduction The almost 150-year evolution of Canada's currency from its colonial origins to the contemporary stage is a challenging subject worthwhile in-depth investigation. This research paper chronologically outlines main historic dates and facts of a Canadian dollar development, including bartering, coinage, bank notes, and paper money. Colonial origins of exchange The first dollars used in Canada were Spanish dollars, eight reales coins issued by Spain and her colonies. Because the colonies used the �sd system for accounting, it was necessary to set a valuation or rating for the Spanish dollar in �sd. Different ratings were used in the different colonies (Wikipedia, Para. 1 Spanish Dollars). According to Adam Shortt, "the first regular system of exchange in Canada involving Europeans occurred in Tadoussac in the early seventeenth century. Here, French traders bartered each year with the Montagnais people (also known as the Innu), trading weapons, cloth, food, silver items, and tobacco for animal pelts, especially those of the beaver" (Powell 3). Interestingly, in 1608 the first colonial settlement at Quebec on the St. Lawrence River was founded by Samuel de Champlain. The beaver pelt was the main product of exchange in the infant colony, though wheat and moose skins were also legally tendered. Considering currency issue, French coins were then widely used as the colony expanded, and its economic and financial needs became more complex. It is noteworthy that coins were much more valued in the French colonies in Canada than in France owing to the risks related to the across Atlantic transporting of gold and silver, as well as attracting and retaining fresh supplies of coin (Powell 3). The application with coinage on the then territory of Canada was added with the first issue of card money on 8 June 1685, which was not recognized as a medium of exchange until recently. Merchants and the general public readily accepted card money, which circulated freely at face value. ...read more.

gold coins, were legal tender. Other foreign silver coins, while not legal tender, continued to circulate" (Powell 24). 1) On April 27, 1842 the Currency Act of 1841 came into effect, making legal tender the British sovereign, and the American eagle ($10), dollar, and half-dollar coins. French crowns and half-crowns were no longer legal tender; 2) In 1850 Inspector-General for the Province of Canada, Francis Hincks, introduced a bill in Parliament, to amend the Currency Act of 1841, giving the Governor General the power to have coins struck for circulation in Canada. The parliament of the Province of Canada passed acts 13 and 14 to amend the Currency Act, allowing authorized banks to produce coins. 3) On August 10, 1850 an Act to amend the 1841 Currency Act received royal assent, with the signature of Lord Elgin, Governor General of Canada. The Act set the value of the American dollar in Canada at 5 shillings. The Act also gave Canada's Governor General the power to have silver coins struck for circulation in Canada, in denominations of 5 shillings, 2 shillings 6 pence, 2 shillings, 1 shilling 3 pence, 1 shilling, 6 pence, and 3 pence. These values corresponded directly to American currency values of $1, 50c, 40c, 25c, 20c, 10c, and 5c. Gold coins were also provided for, in values of 10 shillings, 12 shillings 6 pence, 1 pound, and 1 pound 5 shillings. The Act was set to become law on January 1, 1851; 4) On October 24, 1851 the British Treasury sent a memorandum to the Colonial Office severely criticizing Canadian Inspector-General Francis Hincks' proposed Currency Act of 1850, and demanding its disallowance. And on October 25, Colonial Secretary Earl Grey informed Lord Elgin that the Currency Act of 1850 should be disallowed, as it was not contingent on the acceptability of the British Government; 5) Yet in November, Francis Hincks replied to the British Treasury stating reasons for Canada to issue its own coinage, and that the Currency Act of 1850 should be allowed to stand, and let the legislature repeal certain sections if they are deemed inappropriate. ...read more.

As well, growing investor concerns about the widening U.S. current account deficit undermined the U.S. unit against all major currencies. While the Canadian dollar settled back somewhat during the first half of 2005 as the U.S. dollar rallied modestly against all currencies, underpinned by rising U.S.-dollar interest rates, it began to strengthen again through the summer, supported by rising energy prices. Strengthening against all major currencies, the Canadian dollar touched a high of US$0.8630 on 30 September 2005. In late October it was trading for the most part in S$0.84-0.85 range, off its earlier highs as energy prices retreated (Powell 83). On world markets, the Canadian dollar tended historically to move in the same direction as the U.S. dollar, but less dramatically. A consequence is that at times an apparently rising Canadian dollar is often falling against most of the world's currencies, and vice-versa. However, during the relatively sharp rise of the Canadian dollar since 2002, it has "parted way" with the U.S. dollar and has gained value against it, while also rising against other major international currencies. Although there was a great deal of domestic concern when the Canadian dollar was trading much lower than the U.S. dollar, there is also concern among exporters when the dollar appreciates quickly. The rapid rise in the value of the Canadian dollar increases the price of Canadian exports to the United States, which make up a large part of the economy. On the other hand, Canadian industry enjoys advantages from a rising dollar, primarily in that it is cheaper to purchase foreign material and businesses (Wikipedia, Para 4. Value) Conclusion Over 150-year history Canadian currency has challenged many stages and changes in its development. There were many foreign influences on it on the part of the French, British and the U.S. counterparts throughout the years of gradual evolution. Nevertheless, today Canadian dollar remains stable and internationally recognized currency - a true example of nation's welfare and economic growth. ...read more.