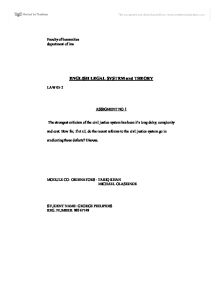 Faculty of humanities department of law ENGLISH LEGAL SYSTEM and THEORY LAW 05-2 ASSIGMENT NO 1 The strongest criticism of the civil justice system has been it's long delay, complexity and cost. How far, if at all, do the recent reforms to the civil justice system go in eradicating these defects? Discuss. MODULE CO- ORDINATORS : TARIQ KHAN MICHAEL OLASEINDE STUDENT NAME: GEORGE PHILIPIDIS REG. NUMBER: 98167749 BIBLIOGRAPHY 1. T. Ingman: THE ENGLISH LEGAL PROCESS, 5TH edition Blackstone press 2. M. Zander: CASES AND MATERIALS ON THE ENGLISH LEGAL SYSTEM, 7TH edition, Butterworth 3. J, Jacobs: FABRIC OF CIVIL JUSTICE, Stevens 4. G. Slaper, D Kelly :PRINSIPLES ON THE ENGLISH LEGAL SYSTEM, 3RD edition Cavendich press The civil justice as a major part of the English legal system is designed to clarify arguments among the citizens of the society. This system has been updated in recent years as a consequence of specific suggestions made by the civil justice review and executed in the Courts and Legal Services Act 1990. ...read more.

The proposals of Lord Irvine gave variety of access to justice ,as in the past people could not afford to bring cases in the court at their own expenses. According to these proposals conditional fee agreements can be made and most of the individuals can bring or defend their cases. Lord Irvine had been anxious with the delay and the cost of the cases. His concerns will be dealt by lords Wolfs reforms of the civil justice system, whose main aims are to reduce the cost and the delay of the cases. Lord Wolf when designing this system had in mind three specific aims: firstly to ameliorate the existing system ,secondly to form an inquisitorial system model and thirdly to alliterate the fundamental law to abrogate the necessity for personal injury claims. Following this concept Lord Wolf published in 1996 his final report "Access to justice". The civil procedure act 1997 has been passed to enforce his report. ...read more.

pre-trial hearing (judge attempts to conciliate the parties) The cases are normally disposed within 10 weeks. the trial is held in private ( with one hearing the case will be dealt ) . Moreover in Lord Wolf's final reform draft rules are set so that the High Court and the county court will function based on the same code. In the need that the system should be more achievable, more fair and efficient Lord Wolf set up a Civil justice council, as the director body , who has to keep under review the civil system. This council is concluded by civil servants , members of the legal profession, particular kinds of litigants and members of the judiciary. Despite all the reforms made to improve the civil legal system, there are many other changes that have to be taken under consideration, so that the civil justice system will be fair in the way it treats its citizen, will be easy to understand, and responsive to the needs of those who use it. The English legal justice system should be effective and organised. ...read more.