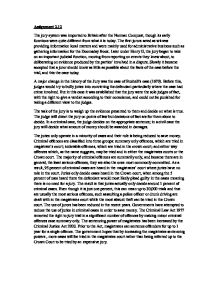 The task of the jury is to weigh up the evidence presented to them and decide on what is true. The judge will direct the jury on points of law but decisions of fact are for them alone to decide.

Assignment 2.12 The jury system was imported to Britain after the Norman Conquest, though its early functions were quite different from what it is today. The first jurors acted as witness providing information local matters and were mainly used for administrative business such as gathering information for the Doomsday Book. Later under Henry II, the jury began to take on an important judicial function, moving from reporting on events they knew about, to deliberating on evidence produced by the parties' involved in a dispute. Slowly it became accepted that a juror should know as little as possible about the facts of the case before the trial, and this the case today. A major change in the history of the Jury was the case of Bushell's case (1670). Before this, judges would try to bully juries into convicting the defendant particularly where the case had crime involved. But in this case it was established that the jury were the sole judges of fact, with the right to give a verdict according to their conscience, and could not be punished for taking a different view to the judges. The task of the jury is to weigh up the evidence presented to them and decide on what is true. ...read more.

Today the senior Courts Act 1981 gives a qualified right to jury trial of civil cases in four types of case. They are * Fruad * False imprisionment * Libel and slander * Malicious prosecution In these cases jury trial is to be granted, unless the court is of the opinion that the trial requires any prolonged examination of documents or accounts, any scientific or to local investigation which cannot conviently be made with a jury. This right is used mostly in defamation actions, although its use may be more limited now that the Defamation Act 1966 has introduced a summary procedure for claims of less than �10,000 which can be heard by a judge alone. In other cases the right to jury trial is at the discretion of the court. There has been criticism of the distinction drawn between the four types of cases which carry a qualified right to trial by jury and other civil case. The Faalks Committee on Defamation 1975 rejected arguments for the complete abolition of juries in defamation cases, but recommended that in such cases the court should have the same discretion to order jury trial as it does in other civil cases, and that the functions of the jury should be limited to deciding issues of liability, leaving the assessment of damages to the judge. ...read more.

In the Juries Act 1974 it states you have to be "aged between 18 and 70 and" "registered on the electoral roll and ""have lived in the UK for at least five years since the age of 13". These are all things which are needed to be eligible for jury duty in the 1970s. Then in the Criminal Justice Act 2003 introduced two more rules to be eligible for jury duty which are "not a mentally disorded person, and "," not be disqualified from jury service". 1970s there were five people who were ineligible for jury service, they were. * The judiciary * Those concerned with the administration of justice, such as barristers, solicitors, prison officers, police officers and even secretaries working for the Crown Prosecution Service; * The clergy (the Runiciman Commission (1993) saw no logical reason for the existence of this exception and recommended its abolition. * People with mental ill health * People on bail in criminal proceedings. This qualification was introduced by 5.40 of the Criminal Justice and Public order Act 1994 following a recommendation made by the Runciman Commission. The Criminal Justice Act 2003 removed most of the grounds for ineligibility and excused have been removed. People can now be disqualified or excused from jury service due to age, residency, mental disability, criminal record, language, medical or other reasons. ...read more.