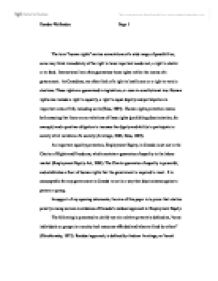 The term 'human rights' carries connotations of a wide range of possibilities; some may think immediately of the right to have important needs met, a right to shelter or to food.

The term "human rights" carries connotations of a wide range of possibilities; some may think immediately of the right to have important needs met, a right to shelter or to food. International law often guarantees those rights within the means of a government. As Canadians, we often think of a right to health care or a right to vote in elections. These rights are guaranteed in legislation, or even in constitutional law. Human rights also include a right to equality, a right to equal dignity and participation in important areas of life, including work (Hess, 1993). Human rights protection means both ensuring that there are no violations of these rights (prohibiting discrimination, for example) and a positive obligation to increase the dignity and ability to participate in society of all members of a society (Armitage, 1996; Hess, 1993). An important equality protection, Employment Equity, in Canada is set out in the Charter of Rights and Freedoms, which contains a guarantee of equality in the labour market (Employment Equity Act, 1996). The Charter guarantee of equality is powerful, and establishes a floor of human rights that the government is required to meet. It is unacceptable for any government in Canada to act in a way that discriminates against a person or group. In support of my opening statements, the aim of this paper is to prove that relative poverty among women is evidence of Canada's residual approach to Employment Equity. The following is presented to clarify my aim relative poverty is defined as, "some individuals or groups in a society lack resources afforded and taken as fixed by others" (Klochkovsky, 1975). ...read more.

As of 1994, 40 percent of women, compared to 27 percent of men, held non-standard jobs, that is, they were self-employed, had multiple jobs, or jobs that were temporary or part-time (Townson, 1996). Many of these jobs were minimum wage jobs and were unlikely to be unionized and unlikely to provide pensions or benefits (Torjman, 1995; Townson, 1996). Also, at the time of marriage breakdown, women become poorer, while men's income increases (Women in Canada, 1995). This means that many women are one non-standard job, or one marriage breakdown, away from needing government income assistance (MacBride-King, 1990). During the 1995 through 2000 period women were hit by restructuring of social programs at both the federal and provincial levels (Day, Young and Won, 1998). This has exacerbated the pre-existing condition of women's disproportionate poverty and is a bitter irony for women (Townson, 2000). As noted, far from implementing the steps set out in the Platform for Action, measures have been instituted which have worsened the situation of Canadian women (Wilson Report, 1998). Monica Townson in her Report Card states, "Governments in Canada have not developed strategies to deal with women's poverty. In fact, many of the policies they have implemented recently have exacerbated the problem and have undoubtedly contributed to increasing poverty rates for women (2000)." Reduction of the deficit and, more recently, the debt has been a key focus for the Canadian government since the early 1990s (Torjman, 1995). Economists have argued that this recent expenditure reduction has resulted in, among other things, a shift in the burden of social welfare from the federal government to provincial government (Day, Young and Won, 1998). ...read more.

Given these realities, it is clear that the equality rights of women can only be recognized when the gendered nature of poverty and economic inequality are acknowledged and addressed through commitment to policy. To summarize, this paper illustrated that there are many barriers still preventing women from full and equal participation in the Canadian economy and in particular the labour market. Many of these barriers are premised on women's unequal burden in relation to homemaking, childcare and community care responsibilities. Women's struggles, especially those whom do not live privileged lives due to poverty, racism, ageism, and ableism, must be viewed in relation to the gendered practices of governmental policy and how it plays a central role in the changing relationship between women, the state, and the economy. The individualistic and instrumental perspectives of policy approaches to employment equity also direct attention away from issues of race, gender and class, while simultaneously reinforcing inequalities based on these differences. Upon review this paper supports my contention that relative poverty among women is evidence of Canada's residual approach to Employment Equity. Having offered this proof, I conclude in suggesting the review and modification (with the full and equal participation of women) of economic and social policies with a view to achieving the objective of the employment equity. Women's poverty and economic inequality are not only evidence of Canada's residual commitment and gendered approach to the Employment Equity Act. This is also evident violation of the Canadian Charter of Rights Freedoms, under which it is regulated. ...read more.