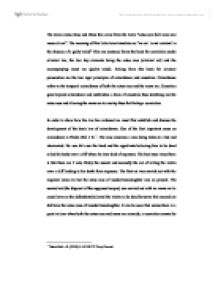 The terms Actus Reus and Mens Rea come from the Latin "actus non facit reum nisi mens sit rea". The meaning of this Latin term translates as "an act is not criminal in the absence of a guilty mind" This one sentence forms the basis for conviction under criminal law, the two key elements being the actus reus (criminal act) and the accompanying mens rea (guilty mind). Arising from this basis for criminal prosecution are the two legal principles of coincidence and causation. Coincidence refers to the temporal coincidence of both the actus reus and the mens rea. Causation goes beyond coincidence and establishes a chain of causation thus stretching out the actus reus and allowing the mens rea to overlap thus facilitating a conviction. In order to show how the law has widened we must first establish and discuss the development of the basic law of coincidence. One of the first important cases on coincidence is Thabo Meli v R. 1. The case concerns a man being taken to a hut and intoxicated. He was hit over the head and the appellants believing him to be dead rolled his body over a cliff where he later died of exposure. The key issue raised here is that there are 2 acts; firstly the assault and secondly the act of rolling the victim over a cliff leading to his death from exposure. ...read more.

The mens rea was carried on throughout as is seen in the Thabo Meli7 case described as part of the "same transaction" and also in the Church case in which it is described as part of the "same series of acts". Thus it can be seen that when disposing of a supposed corpse the initial mens rea can be continued to cover the eventual actus reus of murder/manslaughter. Finally on the point of coincidence the discussion leads us to the more recent case of R. v Le Brun8. This case involves a man who killed his wife by dropping her on her head accidentally after knocking her out in an argument, it mainly deals with the issue of separate transactions. Lord Lane refers to the learned editors of Smith and Hogan: "......an intervening act by the original actor will not break the chain of causation." Thus it can be said that even though the defendant had no mens rea for dropping his wife on her head, he did have mens rea for the preceding assault was sufficient to continue until such time as a 3rd party interrupted the chain of causation which he created when he assaulted his wife. As the wording of the statement in the question states, the law on causation has changed and widened to allow more defendants. ...read more.

The rules governing causation itself have widened since its beginning. It has evolved from being just a chain of events initiated by one actor to a more flexible form in which more than one actor can be tried for their part in causing or contributing to the chain of causation leading to the commission of an offence as is seen in Empress Car Co. v National Rivers Authority13 In conclusion, it can be seen that the case law on coincidence and causation has developed considerably over the last 50-100 years. Since its beginning in c.1954, causation has added a valuable new facet to coincidence and the way the law looks at the coincidence of actus reus and mens rea. It has also facilitated a greater number of defendants to be tried and brought to justice. The main improvement in the law was arguably established in Fagan v MPC14 as it allowed the court to recognise a continuing state of actus reus and also that mens rea does not necessarily have to be present at the inception of the actus reus. This crucial point along with the other effects implemented by causation show that the general rules have widened in both the cases of coincidence and causation. I would suggest that this widening of the rules has proved beneficial for the judiciary and has allowed a greater freedom to apply the law as it was intended to be applied. ...read more.