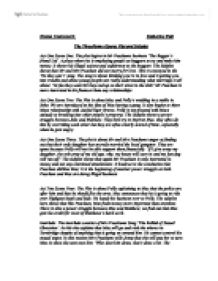 Drama Coursework Katherine Hall The ThreePenny Opera: Plot and Subplot Act One Scene One: The plot begins in Mr Peachums business 'The Beggar's friend Ltd'. A place where he is employing people as beggars to try and make him money. It shows his illegal actions and unfairness to the beggars. The Subplot shows that Mr and Mrs Peachum did not marry for love. This is conveyed in the 'No they can't' song. The song is about thinking you're in love and it getting you into trouble and about young people not really understanding what marriage is all about: 'its fun they want SO they end up on their arses in the s**t/' Mr Peachum is more interested in his finances than any relationships. Act One Scene Two: The Plot is about Mac and Polly's wedding in a stable in Soho. We are introduced to the idea of Mac having a gang. It also begins to show Macs relationship with Jackie/Tiger Brown. Polly is not pleased with Macs attitude to breaking into other people's property. ...read more.

He hands his business over to Polly. The subplot here shows that like Peachum, Mac finds money more important than emotions. There is also a power struggle between Mac and Matthew; we find out that Mac gets the credit for most of Matthews's hard work. Interlude: The interlude consists of Mrs Peachums Song 'The Ballad of s****l Obsession'. In this she explains that Mac will go and visit the whores in Turnbridge despite of anything that is going on around him. He cannot control his s****l urges. In this section Mrs Peachums tells Jenny that she will pay her to turn Mac in when she next sees him. 'Who does him down, that's done a lot. The women. Want it or not, he can't ignore the call. s****l obsession has him in its thrall.' Act Two Scene Five: The plot is Mac going to visit the whores at his regular time. Jenny reads Macs palm and tells him that he is going to be betrayed. ...read more.

'Because he's your pal Brown.' The Subplot shows how easily Brown can be blackmailed; this gives us some clues as to how he and Mac have managed to stay friends. We once again see Mr Peachums desire for money. Act Three Scene Eight: Polly and Lucy are once again arguing over Mac however they realise what is going on and make friends, we find out that Lucy wasn't really pregnant. Mac is recaptured and sentenced to hang. The Subplot shows that although Polly fully understands that Mac is a criminal she is still undoubtedly in love with him. Mrs Peachum is pleased to see that Mac is being hung, as she wants her daughter to return to her business. 'You'll be a lovely widow. But you'll have to cheer up a little.' Act Three Scene Nine: Mac is to be hung under the bells of Westminster. Polly visits Mac. Mac tries to buy himself out but does not get the money together in time. He is ready to hand when the queen sends a royal official to pardon him. 'Reprieved, my dearest Macheath is reprieved.' The subplot shows us that Mac tries to make himself into middle class by eating Asparagus. ...read more.