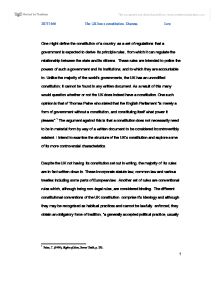 One might define the constitution of a country as a set of regulations that a government is expected to derive its principle rules, from which it can regulate the relationship between the state and its citizens. These rules are intended to police the powers of such a government and its institutions, and to which they are accountable to. Unlike the majority of the world's governments, the UK has an uncodified constitution; it cannot be found in any written document. As a result of this many would question whether or not the UK does indeed have a constitution. One such opinion is that of Thomas Paine who stated that the English Parliament "is merely a form of government without a constitution, and constituting itself what power it pleases".1 The argument against this is that a constitution does not necessarily need to be in material form by way of a written document to be considered incontrovertibly existent. ...read more.

However, constitutional laws in the UK are neither entrenched nor supreme, as the basis of the UK constitution is a doctrine of Parliamentary Sovereignty, thus allowing any government in power with its overwhelming majority to effectively alter the constitution by repealing any past statutes and implementing new legislation. One advantage of having a flexible constitution such as this is that it can be modernised without too much difficulty in tune with an ever-changing society, the most notable of recent times being the Human Rights Act 1998 and the devolution statutes such as the Referendums Act 1997. Some might argue that with the UK's Parliament possessing an incomparable measure of power, this is in some way unconstitutional. However there are numerous restraints present in conventions that Parliament is forced to observe. The UK constitution is in no doubt a unitary one, with power ultimately residing with the central government. ...read more.

Another addition and also one of the most notable of the last century was the Bill of Rights in 1689 which, upon the restoration of the monarchy after Cromwell's revolution, put in place the fundamental grounds for the present constitution. The majority of these ideals can still be seen today. However, in more recent times, the general constitutional philosophy as influenced by A.V Dicey suggests that British citizens are "without benefit of positive and fundamental constitutional rights giving legal protection to the individual against the public authorities of the state".4 This can be seen to be a fairly accurate outlook of the modern constitution as there is no "fundamental" constitutional law that takes precedence over legislation. In conclusion, when taking into account its many diverse components, it is more than apparent that the UK does in fact have a constitution; one that clearly sets out how political power is allocated and contains the vast majority of the fundamental principles found in any formal constitution and a colossal amount of those that are not. ...read more.