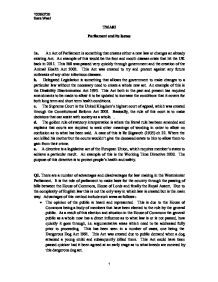 There are a number of advantages and disadvantages for law making in the Westminster Parliament. It is the role of parliament to make laws for the country through the passing of bills between the House of Commons, House of Lords and finally the Royal As

TMA02 Parliament and its Issues 1a. An Act of Parliament is something that creates either a new law or changes an already existing Act. An example of this would be the foot and mouth disease crisis that hit the UK back in 2011. This Bill was passed very quickly through government and the creation of the Animal Health Act 2002. This Act was created to try and protect against any future outbreaks of any other infectious diseases. b. Delegated Legislation is something that allows the government to make changes to a particular law without the necessary need to create a whole new act. An example of this is the Disability Discrimination Act 1995. This Act both in the past and present has required amendments to be made to allow it to be updated to increase the conditions that it covers for both long term and short term health conditions. c. The Supreme Court is the United Kingdom's highest court of appeal, which was created through the Constitutional Reform Act 2005. Basically, the rule of this court is to make decisions that can assist with society as a whole. ...read more.

* The creation of an Act of Parliament has to go through many lengthy and complex areas whilst going through both the House of Commons and the House of Lords. As a result of this there have been times when both the general public and the media have complained that the process is far too long to allow an act to be processed and endorsed. This was seen in both the dangerous dog act 1991 in which after the first child was killed by a dog, other breeds were seen in the media attacking other children and a few adults and the police's hands were tied as to which breeds would be covered under this new act. Another act was the Anti - Terrorism, Crime and Security Act 2001 which was put into force after the 9 11 attack in both Washington DC and New York USA. This act was to try and cut off funding for terrorism across the world. However, there was public outrage for the timing for this act to be finalised and what was happening in both in this country and across the world around the same time. ...read more.

A disadvantage would be that this system can be slow or unclear and may need further reform. Unfortunately, none of this would be possible until after the case has been heard by which time it might be too late for that case. Another disadvantage could be that some laws have a slight interpretation to them which could affect a number of cases. I am of the understanding, having read the literature and the dvd from the Open University that the Judges that sit in the various courts across the nation do not make our law but up hold it so that it can be unanimously enforced throughout without there being any deviation at to what has been said and which law / acts have been breached. It can be said though that the art of law making and all its processes is governed by the judiciary system and the legislative body. It is these two professional bodies that need to work hand in hand in order to allow the laws to be approved as necessary for the welfare of the countries structure. This law is then passed further along the bodies to be reinforced by the executive body. ...read more.