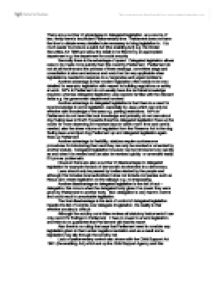 There are a number of advantages to delegated legislation, as a source of law, firstly there is insufficient Parliamentary time.

There are a number of advantages to delegated legislation, as a source of law, firstly there is insufficient Parliamentary time. Parliament does not have the time to debate every detailed rule necessary to bring legislation in. It is much easier to produce a quick Act (the enabling Act) e.g. the Social Securities Act 1986 and allow the detail to be filled in by an appropriate department e.g. the department for social security. Secondly there is the advantage of speed. Delegated legislation allows rules to be made more quickly than this could by Parliament. Parliament do not sit all the time and the process of three readings, committee stage and consultation is slow and arduous and would not be very applicable when legislation is needed in response to emergencies and urgent problems. ...read more.

Another advantage is flexibility, statutes require cumbersome procedures for introducing them and they can only be revoked or amended by another statute. Delegated legislation however can be introduced very quickly as and when it is needed and can also be revoked quickly or amended easily if it proves problematic. However there are also a number of disadvantages to delegated legislation for example the lack of democratic involvement in a democracy. Laws should only be passed by bodies elected by the people and although this includes local authorities it does not include companies such as Nexus who create legislation on the railways e.g. no trespassing. Another disadvantage to delegated legislation is the risk of sub-delegation, this occurs when the delegated body gives the power they were given by Parliament to another body. ...read more.

Lack of control is also shown with the enabling Act; the problem with the enabling Act is that it gives wide discretionary powers to ministers and so this makes it hard to prove that a piece of legislation is ultra vires. Also to challenge a piece of legislation on the grounds that it is ultra vires requires an individual case in court before a judiciary and this may not happen until years after the legislation has been implemented, and not until someone who is prepared to challenge it will it be changed, thus affecting many people in the meantime. Overall there are many disadvantages to delegated legislation however I think that these are outweighed by the advantages. Therefore I feel that it would be impossible to do without delegated legislation, as it is vital in most modern situations. ...read more.