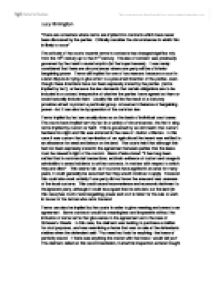 &quot;There are occasions where terms are implied into contracts which have never been discussed by the parties. Critically consider the circumstances in which this is likely to occur&quot;

"There are occasions where terms are implied into contracts which have never been discussed by the parties. Critically consider the circumstances in which this is likely to occur" The attitude of the courts towards terms in contracts has changed significantly from the 19th century up to the 21st century. The law of contract was previously governed by the maxim caveat emptor (let the buyer beware). It was rarely considered that there are circumstances where one party will be of inferior bargaining power. Terms will implied for one of two reasons: because a court in a later dispute is trying to give effect to a presumed intention of the parties, even though these intentions have not been expressly stated by the parties (terms implied by fact); or because the law demands that certain obligations are to be included in a contract irrespective of whether the parties have agreed on them or would naturally include them. Usually this will be the result of a statutory provision aimed to protect a particular group or level an imbalance of bargaining power - but it can also be by operation of the common law. Terms implied by fact are usually done so on the basis of individual court cases. The courts have implied term by fact in a variety of circumstances, the first being terms implied by custom or habit. This is governed by an old maxim that custom hardens into right and this was enforced in the case of Hutton v Warren. In this case it was custom that on termination of an agricultural the tenant was entitled to an allowance for seed and labour on the land. The courts held that although this had not been expressly stated in the agreement between parties that the lease must be viewed in light of the custom. Baron Parke stated: "it has long been settled that in commercial transactions, extrinsic evidence of custom and usage is admissible to anew incidents to written contracts, in matters with respect to which they are silent". ...read more.

The claimants withheld rent in protest, when the council sued, the tenants counter- claimed, arguing a breach of the implied term that the council should maintain common areas of the building. In the Court of Appeal, Lord Denning felt that such a term could be applied as it was reasonable in the circumstances. The House of Lords though rejected this more relaxed approach. Lord Wilberforce said that to do this would be to "extend a long and undesirable way beyond sound authority". The House of Lord were not prepared to accept that the council had an absolute obligation to maintain the common areas, but did recognise the implied term to take reasonable care to maintain the common areas , which they did not feel had been breached by the council. This may seem unfair on the tenants, who were living in a 15 storey building with faulty lifts, dark corridors and non - functioning rubbish chutes. We would on the face of it believe that maintenance of the common areas was the council's responsibility. Despite this, Lord Denning's approach was arguably too relaxed. Implying an absolute obligation on the part of the council to maintain common areas would have been impossible. This would mean that every time the slightest thing was not in full working order (including a single broken light bulb); the council would be in breach of this absolute obligation. The House of Lords believed this would be an unreasonable expectation Terms that have not been expressly discussed by the parties can also be implied by law in two ways, by the courts and by statutes. Terms implied by law are done so irrespective of irrespective of the wishes of the parties. The justification is that the law, either the courts or parliament itself wishes to regulate such agreements. It is often felt that a particular term should naturally be incorporated into a contract of a particular type. ...read more.

The defendant was not entitled to any amount of payment from the claimant. This is fair on the part of the claimant, but may be considered unfair of the part of the defendant. If only one part of the work was not up to standard, the precedent set in the above case means that the defendant would not be entitled to payment for any of the work hat had been completed, even if this was up to the required satisfactory standard. S14 is an implied term hat where the time for the service to be carried out is not fixed, the supplier will carry out the service within a reasonable time. This is shown in the case of Charnock v Liverpool Corporation. In this case the defendant took eight weeks to repair a car when a competent repair should have taken only five weeks and so the defendant was in breach of the implied term. This decision could be seen as harsh, as this would mean that if for any reason a repair shop owner became overrun with work, or did not have his usual number of staff for any reason, he could find himself in breach of this term in a lot of contracts. This means that although it means that the consumer is not waiting an unreasonable time for services, it can also be unnecessarily harsh on the supplier. S15 is the implied term that where no price is agreed for the supply of the service, the party contracting to with the supplier will pay a reasonable charge. This is fair for the supplier as it means that they can be expect to be paid well and not be 'ripped off' but the consumer, or other contracting party. However it does leave contracting parties wondering what a 'reasonable' price is, and the safest way to avoid this is to agree a price prior to the supply of the service. ?? ?? ?? ?? Lucy Rimington ...read more.