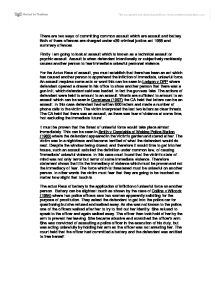 There are two ways of committing common assault which are assault and battery. Both of there offences are charged under s39 criminal justice act 1988 and summary offences.

There are two ways of committing common assault which are assault and battery. Both of there offences are charged under s39 criminal justice act 1988 and summary offences. Firstly I am going to look at assault which is known as a technical assault or psychic assault. Assault is when defendant intentionally or subjectively recklessly causes another person to fear immediate unlawful personal violence. For the Actus Reus of assault, you must establish that there has been an act which has caused another person to apprehend the infliction of immediate, unlawful force. An assault requires some acts or word this can be seen in Lodgon v DPP where defendant opened a drawer in his office to show another person that there was a gun in it, which defendant said was loaded. In fact the gun was fake. The actions of defendant were held to amount to an assault. Words are sufficient to amount to an assault which can be seen in Constanza (1997) the CA held that letters can be an assault. In this case defendant had written 800 letters and made a number of phone calls to the victim. The victim interpreted the last two letters as clear threats. ...read more.

The court held that the officer had committed a battery and the defendant was entitled to free herself. For a battery to be committed the force must be unlawful. Thus a parent who smacks his child, depending on the circumstances of the case, may not be inflicting' unlawful' force. This can be seen in A v UK (1998) where a father who had beaten his son with a garden cane, the ECHR ruled that a law allowing force to be used on children offends art 3 of the ECHR. Nevertheless despite this ruling in England if the force is used to correct a child, then this is lawful. A battery can be through an indirect at which can be seen in Martin (1881) where the defendant placed an iron bar across the doorway of a theatre. He then witched off the lights. In the panic that followed, several of the audience were injured when they were trapped and unable to open the door. We can see that in Martin's case the defendant did not directly cause injury to the audience but did so via other means. A battery may be committed through a continuing ac as in Fagan v Metropolitan Police Commander (1968) ...read more.

Psychiatric injury also classed as 'actual bodily harm'. In the case of Ann, injuries to Ben were more severe than assault and battery as he lost the sight in one eye. there is no additional mens rea requirement for that of Actual bodily harm thus the mens rea for common assault will suffice and althoughtABH is more serios offence, recklessness will suffice, and provide that there is a risk involved it need not to be a serious risk. R v Savage (1991) where a women in a pub threw beer over another woman. in doing this the glass slipped from defendant's hand and the victim's hand was cut by glass. the defendant said that she had only intended to throw beer over her victim. she had not intended her to be injured, nor had realised that there was a risk of injury. held in the HL: the fact that she had intended to throw beer over the women meant that she had intend to apply unlawful force. in the case of Ann and Ben, which is quite similar to the case of R v Savage, Ann did intended some harm to her victim as she tried to punch him but it cant be Actual Bodily Harm because the injuries to Ben were more severe then ABH so now i am going to look at GBH S20 to find out Ann's Criminal liability. ...read more.