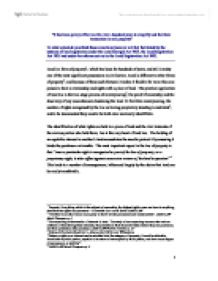 "It has been policy of the law for over a hundred years to simplify and facilitate transaction in real property" To what extent do you think these aims have been (or will be) facilitated by the systems of land registration under the Land Charges Act 1925, the Land Registration Act 1925 and under the reforms set out in the Land Registration Act 2002. Land is a form of property1, which has been for hundreds of years, and still is today one of the most significant possessions in civilisation. Land is different to other forms of property2, and because of these such features it makes it feasible for more than one person to have a relationship and rights with a piece of land. The practical application of land law is the two-stage process of conveyancing3, the proof of ownership and the discovery of any encumbrances burdening the land. To facilitate conveyancing, the number of rights recognised by the law as having proprietary standing is restricted4, and to be documented they need to be both clear and easily identifiable. The identification of what rights are held in a piece of land and the rival interests of the various parties who hold them, lies at the very heart of land law. The holding of an equitable interest in another's land necessitates the need to protect it by ensuring it binds the purchaser on transfer. The most important aspect in the law of property is that "once a particular right is recognised as part of the law of property, or a proprietary right, it takes affect against successive owners of the land in question"5 This leads to a number of consequences, influenced largely by the desire that land can be easily transferable. Before 1925, in transaction of a property the seller had to prove he had 'title' to pass on and was not subject to any unidentified commitments and through a very burdensome process all legal and equitable interests in the land had to be traced back in time some thirty years. ...read more.

The knock on effect of these changes being that far more estates will be eligible to be registered under the new act.. Under the 1925 legislation in order to register an estate it had to be either a fee absolute in possession or a lease exceeding 21 years, this is due to change to leases of seven years or less, with a power to reduce it further. Formally it was only the sale that used to trigger registration but now the law is bringing in the reform of any transfer for valuable or other consideration. The former rule of registration being void if the estate was not registered within two months from the date of transfer is set to be changed to the estate being held on a trust. There was a real endeavour to change under the reformed act the present rules of adverse possession or 'squatters rights' as they are more commonly known; to provide better protection for the owners of 'registered land'. The act will make it much harder for an occupier to establish adverse possession to combat the general feeling that the law was too favourable to squatters under the 1925 legislation39. There is emphasis on the disapplication of periods of limitation40 of which there was formerly no period of limitation under s. 15 of the LA 1980 (c.58)41. One important feature of the current legislation that is due to be changed by the new Act is that of overriding interests, the major area of criticism under the registered land system due to the fact that people can find that they have bought estates which are subject to adverse interests which are not clear from the register and difficult to determine. The two distinct lists42 of the interests that are not registrable are set out in the act but are narrowed quite intensely43. The protection of the interests of third parties over registered land by 'notices' and 'restrictions' was reduced by the new Act44. ...read more.

These changes, taken together, are likely to be even more far-reaching than the great reforms of property law that were made by the 1925 property legislation." 38????? "a complete and accurate reflection of the state of the title of the land at any given time, so that it is possible to investigate title to land online, with the absolute minimum of additional enquiries and inspections" 39 Newspaper Article 'Widow gains squatters' right over $10 land' 40 s. 96 LRA 2002 41 s. 15 LA 1980 (c.58) "Time limits in relation to the recovery of land- shall run against any person, other than the chargee, in relation to an estate in land......the title to which is registered." 42 1. those interests relevant to the first registration of title; 2. Those interests dealing with registered land. 43 http://www.hmso.gov.uk/acts Land Registration Act 2002 Explanatory Notes, p. 4 "The ambit of particular categories will be abolished altogether, and others will be phased out after ten years" 44 s.32 (1), s. 33, s. 40, s.42 (1), s. 46 LRA 2002, 45 http://www.hmso.gov.uk/acts Land Registration Act 2002 Explanatory Notes, p. 4 46 http://www.easyconvey.com "Shown by the fact that only twenty percent of land is left unregistered, guaranteeing some �2000 billion worth of property". 47 s. 3 (1) LCA 1972 A land charge shall be registered in the name of the estate owner intended to be affected. 48 Diligent Finance Co. v Alleyne [1972] A wife sought to register a class F land charge against her husband, whom she knew by the name Erskine Alleyne. Unknown to her, he had a middle name, Owen. The finance company searched against the full, correct version and obtained a clear certificate of search, and her attempted registration was held to be ineffective. 49 The Acts were the Trustee Act 1925 (TA 1925), Law of Property Act 1925 (LPA 1925), Land Registration Act 1925 (LRA 1925), Land Charges Act 1925 (LCA 1925)(now replaced by the Land Charges Act 1972 (LCA 1972) and Administration of Estates Act 1925 (AEA 1925) 1 ...read more.