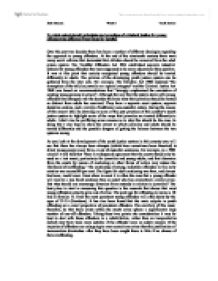 To what extent should principles and practices of criminal justice for young offenders be different from those for adults?

To what extent should principles and practices of criminal justice for young offenders be different from those for adults? Over the past two decades there has been a number of different ideologies regarding the approach to young offenders. At the end of the nineteenth century there were many social reforms that demanded that children should be removed from the adult prison system. The Youthful Offenders Act 1854 established separate industrial schools for young offenders that were supposed to be more educational than punitive. It was at this point that society recognised young offenders should be treated differently to adults. The policies of the developing youth justice system can be gathered from the later acts. For example, The Children Act 1908 endorsed "the conception of the child or juvenile as a special category" and the Criminal Justice Act 1948 was based on recommendations that "strongly emphasised the unwisdom of sending young persons to prison". Although the way that the system deals with young offenders has changed over the decades the basic tenet that juveniles should be treated as distinct from adults has survived. They have a separate court system, separate detention centres, and a variety of additional non-custodial orders. During the course of this essay I shall be drawing on some of the past practices of this country's youth justice system to highlight some of the ways that juveniles are treated differently to adults. ...read more.

is likely to be counter-productive and may set juveniles off on a criminal career at an early age. This has got to be detrimental to society, even if only on an economic level, as the earlier they start the more money they are going to cost the community, not only in the crimes they commit, but also in the further judicial intervention they incur. In highlighting these points, however, one must be aware not to become too lenient in the treatment of young offenders. You don't want to treat them with kid gloves, so to speak. As important as it is to understand the differing needs of children as compared to adults, one must be careful not to treat them so differently as to legitimise their behaviour. Although the welfare of the young offenders is important, what is equally important is the fact that they are still treated as a young offender. In some respects this may advocate treating them in a harsher way than adults in the same position. For example, although the greater proportion of offences committed by young offenders result in a caution (or now warnings and reprimands) it must also be noted that a number of juvenile offences are cautioned that would not have resulted in a caution if committed by an adult. ...read more.

To treat them too differently may be to play down the effects of their behaviour and tacitly encourage offending. The Home Secretary voiced this concern in 1994 when he said that repeat cautioning of young offenders led to the reduction in the effect of the caution and had limited effect on reoffending. It is unclear where the balance lies. Although the recent developments in the youth justice system in this country seem to be coming somewhere close. Although they have become tougher this tightening up seems to be taking place out of court rather than in it. Action Plan Orders, reparative orders and referrals make the juvenile acknowledge that he has wronged but also go some way to trying to rehabilitate them back into society. This comes somewhere in between the welfare approach (best posited by the Children and Young Persons Act 1969) and the justice approach (which is much more akin to the time of the Conservative boot camps and short, sharp shock treatments). Whether this has struck the right balance only time will tell. It does acknowledge that young people can be moral agents, although they may not be as free in their choices as adults and so deals with them in a slightly different way, but a way that still holds them accountable for their actions. Kate Johnson Week 6 Youth Justice ...read more.