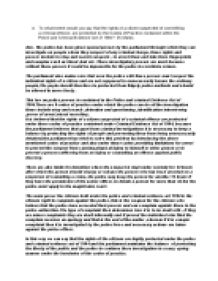 To what extent would you say that the rights of a citizen suspected of committing a criminal offence are protected by the Codes of Practice contained within the Police and Criminal Evidence Act of 1984?

﻿* To what extent would you say that the rights of a citizen suspected of committing a criminal offence are protected by the Codes of Practice contained within the Police and Criminal Evidence Act of 1984? 25 Marks Ans. The police has been given special powers by the parliament through which they can investigate on people whom they suspect of any criminal charge, these rights and powers include to stop and search suspects , to arrest them and take there fingerprints and samples such as blood ,hair etc. These investigatory powers are must because without these powers it would be impossible for the police to scrutinize crimes. The parliament also makes sure that even the police with these powers must respect the individual rights of a citizen and are ...read more.

It is believed that the rights of a citizen suspected of a criminal offence are protected under these codes of practice contained under Criminal Evidence Act of 1984, because the parliament believes that apart from criminal investigations it is necessary to keep a balance by protecting the rights of people and preventing them from being unnecessarily detained,the parliament has tried to solve this problem by introducing the above mentioned codes of practice and also under those codes providing limitations for arrest to prevent the suspect from causing physical injury to himself or other person or to prevent a person suffereing from an injury or commiting an offence against public decency. ...read more.

complain againts those to the police authorities.The type of complaint then determines how it is to be dealt with , if they are minor complaints they are dealt informally and if proved the individual who filed the complain receives an apology and that is the end of the matter ,whereas if it is a major complaint then it is investigated by the police force and necessary actions are taken against the police officer. In this way we can say that the rights of the citizens are highly protected under the police and criminal evidence act of 1984 and the parliament maintains the balance of protecting the liberty of the public and the police to continue there investigation in a easy -going manner under the bondaries of the codes of practice. ...read more.