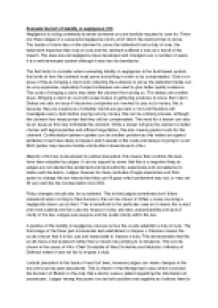 Tort Law. Evaluate the tort of liability in negligence.

ï»¿Evaluate the tort of liability in negligence (18) Negligence is acting carelessly towards someone you are lawfully required to care for. There are three stages of a successful negligence claim, all of which the claimant has to prove. The burden of claim lies on the claimant to prove the defendant had a duty of care, the defendant breached their duty of care and the claimant suffered a loss as a result of the breach. The laws around negligence have developed and changed over a number of years, it is a well developed system although it also has its drawbacks. The first factor to consider when evaluating liability in negligence is the fault based system, this looks at how the claimant must prove everything in order to be compensated. Cost is an issue of this as bringing a claim and collecting the evidence to prove the defendant liable can be very expensive, especially if expert witnesses are used to give better quality evidence. The costs of bringing a claim may deter the claimant from doing so. The delays are another issue. ...read more.

Policy changes should also be considered. This is that judges sometimes don't follow precedent when coming to their decision, this can be shown in White v Jones involving a negligently drawn up contract. This is beneficial to the particular case as it means the correct and most suitable and fair outcome however it also provides unpredictability and lack of clarity in the law. Judges owe lawyers and the public clarity within the law. A positive of the liability in negligence process is how the courts establish a duty of care. The third stage of the three part incremental test established in Caparo v Dickman means the courts ensure that it is fair, just and reasonable to impose a duty. This demonstrates that the courts have a fair approach rather than a broad one jumping to conclusions. This can be shown in the cases of Hill v Chief Constable of West Yorkshire and Mulcahy v Ministry of Defence where it was not fair to impose a duty. Judicial precedent is the basis of most tort laws, however judges can make changes in the law and overrule past precedents. ...read more.

online courts could also help to improve the process. There is already an online court to deal with debt claims, this could be done to personal injury claims too as it will help to speed up the process and seem less intimidating. The idea for reform is increased use of alternative dispute resolution for liability in negligence. Mediation is commonly used in family cases, this could be used for personal injury too. The Online Dispute Resolution is using technology to simplify and speed up the claims process without the use of courts. This cuts delays and costs. To conclude, the process of claiming and proving liability in negligence is a costly process with the use of lawyers and gathering evidence but also a fair one with the courts having a fair approach and looking at each case to find the best outcome. There are many positives and negatives of the fault based system, policy changes, judicial law making, changes in law and proving the duty of care. Despite the many possible reforms such as state funded benefit schemes, compulsory insurance, online courts and alternative dispute resolution, liability in negligence is a fair system based on years of judicial reform. ...read more.