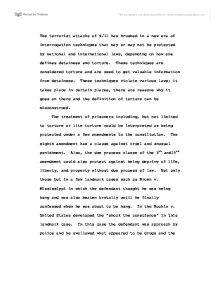 The terrorist attacks of 9/11 has brushed in a new era of interrogation techniques that may or may not be protected by national and international laws, depending on how one defines detainees and torture. These techniques are considered torture and are used to get valuable information from detainees. These techniques violate various laws; it takes place in certain places, there are reasons why it goes on there and the definition of torture can be misconstrued. The treatment of prisoners including, but not limited to torture or lite torture could be interpreted as being protected under a few amendments to the constitution. The eighth amendment has a clause against cruel and unusual punishment. Also, the due process clause of the 5th and14th amendment could also protect against being deprive of life, liberty, and property without due process of law. Not only those but in a few landmark cases such as Brown v. Mississippi in which the defendant thought he was being hung and was also beaten brutally until he finally confessed when he was about to be hung. In the Rochin v. United States developed the "shock the conscience" in this landmark case. In this case the defendant was approach by police and he swallowed what appeared to be drugs and the officers had his stomach pumped, which violated his constitutional rights. ...read more.

Basically the only reason to comply with this is to save face. But as Americans we seem to keep that revolutionary spirit. Also, it would be a way to reduce trade with another country and it doesn't affect us because people want to make money off of us since most of the things we buy come from overseas. As our great president Bush once said, "More and more our imports come from overseas". Who can argue with that well thought out information? Next, Guantanamo Bay is a well know prison for terrorists. Guantanamo Bay refers to a U.S. Naval base in the southeastern part of Cuba which consists of 5 square miles for the base. It was used for Haiti refugees until the mid 90's and wasn't used until the U.S. declared the war on terror. It is the oldest U.S. base outside of the continental United States . And the base is only one in a country where we don't share any interest in. Now it is used to house suspected terrorists. In 2006, "Bush report that a total of 770 detainees who had been brought to Guantanamo , approximately 315 had been released" (Moran). And most of the detainees left will be held indefinitely. Experts argue back and forth that it is either under the jurisdiction of the United States or Cuba . ...read more.

And during visits by many of the generals and members of President Bush's office, the guards were told that they were doing a great job. "If Americans thought at all about the practice of torture before Abu Graib and Guantanamo, perhaps the Inquisition or medieval blood sanctions come to mind-not U.S. military and intelligence operations" (Weiss). President Bush even pardoned himself and many of his cabinet from any future crimes that may come from any torture cases from September 11, 2001 to the present time. And while he and his cabinet gets off scot free while many troops are getting court marshaled for things they thought they were getting the okay for. In some aspects torture would be considered a good thing because we would be saving lives that could be endangered by another attack by terrorists on the US . On the other hand many innocent people were captured because people would collect money from turning these people in for a cash reward. These techniques used to get the information from these people violate various laws; it takes place in certain places, there are reasons why it goes on there and the definition of torture can be misconstrued. Most of the people in Guantanamo Bay were not terrorists at all and innocent people have died because of it. If we want to get information we should get it the right way and we should set an example to the rest of the world and ban torture ourselves. ...read more.