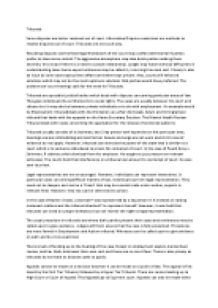 ﻿Tribunals Some disputes are better resolved out of court. Alternative Dispute resolutions are methods to resolve disputes out of court. Tribunals are one such way. Resolving disputes via the fixed legal framework of the court may confbe detrimental if parties prefer to have more control. The aggressive atmosphere may also dvide parties making them enemies, this is bad if there is a need to sustain relationship. Judges may have technical difficulties in understanding cases hence expert witnesses may be called in, incurring time and cost. Privacy Is also an issue as some cases eg business affairs are better kept private. Also, courts will enforced solutions which may not be the most optimum solutions that parties would have preferred. The problems of court hearings calls for the need for Tribunals. Tribunals are specialist judicial bodies which deals with disputes concerning particular areas of law. They give individuals the entitlements to social rights. The cases are usually between the court and citizens but it may also be between private individuals or to do with employment. ...read more.

They need not be lawyers and can be a ?friend? that may be a social trade union worker, experts in relevant field. However, they too can be sentenced to prison. In the case of Bache v a***s, a woman P was represented by a lay person X. X insisted on raising irrelevant matters and the tribunal directed P to represent herself. However, it was held that tribunals can insist on proper behaviour but not restrict the right to legal representation. The usual procedure in tribunals are where both parties present their cases and a witnesses may be called upon to give evidence. Judges will them ensure that the case is fully presented. Procedures are more formal in Employment and Asylum tribunal. Witnesses can be called upon to give evidence on oath and be cross examined. There is lack of funding up to the hearing of the case. Except in employment asylum,mental heal review and tax. Each side bears their own cost and there are no court fees. ...read more.

Applicants have to foot the bill themselves. This may be expensive if applicants are legally represented. If they do not, it will be very unfair if the other side has legal representation. Parties may be confused by the procedure as it is more formal than other forms of ADR. Privacy can also lead to suspicion of fairness. No precedent would make law uncertain and unpredictable. Also delays as Employment Tribunal takes up a year to be heard. Appeals an additional year.. Poor decisions made due to speed informality and inconsistency. Although tribunals may be effective form of ADR it has its drawbacks. The other The advantages of tribunals us they are cheap and less court fees. Tribunals process cases quicker than courts hence reduce workload of courts. They are specific hence save time and cost. No legal representation rep themselves no lawyer fees. However, there are disadvantages no funding parties foot own bill exp if there is legal rep. If choose not, unfair if other side has legal rep. No precedent decision uncertain inconsistent and unpredictable. Parties confused as more formal than other forms of ADR. ...read more.