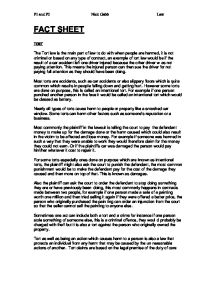 FACT SHEET TORT The Tort law is the main part of law to do with when people are harmed, it is not criminal or based on any type of contract, an example of tort law would be if the result of a car accident left one driver injured because the other driver was not paying attention. This means the injured person can then sue the driver for not paying full attention as they should have been doing. Most torts are accidents, such as car accidents or also slippery floors which is quite common which results in people falling down and getting hurt. However some torts are done on purpose, this Is called an intentional tort. For example if one person punched another person in the face it would be called an intentional tort which would be classed as battery. Nearly all types of torts cause harm to people or property like a smashed car window. Some torts can harm other factors such as someone's reputation or a business. Most commonly the plaintiff in the lawsuit is telling the court to pay the defendant money to make up for the damage done or the harm caused which could also result in the victim to be affected and lose money. ...read more.

For example if you are a doctor your job is to care for your patients and ensure you are doing your job properly as not doing so could result in injury or even fatal consequences. It is important that as a doctor you are careful when doing things such as prescribing patients the appropriate amount and safe medication. Case 1: Hotson v East Berkshire Health Authority [1987] HL [Tort - negligence - damage - causation - medical treatment - loss of chance of recovery] D the hospital where C, a young boy was taken after he fell out of a tree injuring his hip. The injury was wrongly diagnosed and he was thus given inappropriate treatment. He suffered a permanent disability; the hospital admitted negligence but denied liability. C could not prove that the treatment for his injury had caused his disability and therefore the chances were 75-25 that it hadn't. Therefore they had no claim at all. If C could of proven that the medical negligence was the cause which worsened the condition he would have been entitled to full damage.. Case 2: Ogwo v Taylor [1987] HL [Tort - damage - foreseeability] D negligently set fire to his house while using a blowlamp. ...read more.

As the person who crashed has a duty of care it is up to them to ensure they do not cause any damage or put anyone in danger. The person would then have to pay damages of whatever it cost for the person to fix their car and anything else which could have affected them, e.g. injured their back, the defendant would then have to pay for whatever hospital or physic therapy costs. A cash compensation ordered by a court to offset losses or suffering caused by another's fault or negligence. Damages are a typical request made of a court when persons sue for breach of contract or tort. "Damages: A sum of money awarded by the court as compensation to the claimant. Aggravated damages: Additional damages which the court may award as compensation for the defendant's objectionable behavior. Exemplary damages: Damages which go beyond compensating for actual loss and are awarded to show the court's disapproval of the defendant's behavior" In a tort case It I better when someone poor is injured and suing someone rich as they can then claim more whereas if it is the other way round they cannot be awarded as much damages especially if the defendant doesn't have any money. Sources: http://sixthformlaw.info/02_cases/mod3a/aqa/_cases_tort_3damage.htm#Hotson v East Berkshire Health Authority [1987] HL ?? ?? ?? ?? P1 and P2 Nick Gabb Law ...read more.