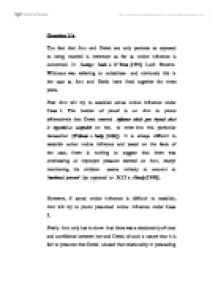 Undue influence in the case of Barclays Bank v. O''Brian [1994] Lord Browne-Wilkinson was referring to cohabitees.

Question 1/a The fact that Ann and Derek are only partners as opposed to being married is irrelevant as far as undue influence is concerned. In Barclays Bank v. O''Brian [1994] Lord Browne-Wilkinson was referring to cohabitees and obviously this is the case as Ann and Derek have lived together for three years. First Ann will try to establish actual undue influence under Class 1. The burden of proof is on Ann to prove affirmatively that Derek exerted influence which goes beyond what is regarded as acceptable on her, to enter into this particular transaction (Williams v Bailey (1866)). It is always difficult to establish actual undue influence and based on the facts of the case, there is nothing to suggest that there was overbearing or improper pressure exerted on Ann, except mentioning his children seems unlikely to amount to 'emotional pressure' (as opposed to BCCI v. Aboody [1989]). However, if actual undue influence is difficult to establish, Ann will try to prove presumed undue influence under Class 2. Firstly Ann only has to show that there was a relationship of trust and confidence between her and Derek of such a nature that it is fair to presume that Derek abused that relationship in persuading Ann to enter the transaction (Barclays Bank v. O'Brian [1994]) and secondly that the transaction was not readily explicable by the relationship between them (Allcard v. ...read more.

affirmation or delay which does not seem to be the case here (it is unlikely to be long enough to bar rescission). It looks as if the contract to pay the extra �1,000 is voidable for economic duress, thus Ilgar should be able to rescind the contract and recover the extra money. ECONOMIC DURESS In recent times, the courts have extended the concept of duress from its earlier limits so as to recognise that QB 705. The Privy Council had an opportunity to consider economic duress, and agreed with the observations in The Sibeon and The Sibotre, in: Pao On v Lau Yiu Long [1980] AC 614. A further important development was the decision of the House of Lords, which modified the approach previously taken, in: Universe Tankships v ITWF (The Universe Sentinel) [1982] 2 All ER 67. A significant feature of this judgment is its departure from the previously stringent requirement of The Sibeon and Pao On that the victim's will and consent should have been 'overborne' by the pressure. This approach of Lord Scarman was cited and approved by the Court of Appeal in: B&S Contractors v Victor Green Publications [1984] ICR 419. The concept of economic duress was considered in two High Court cases: Atlas Express Ltd v Kafco (Importers and Distributors) Ltd [1989] 1 All ER 641 Vantage Navigation Corp v Bahwan Building Materials (The Alev) ...read more.

See: Barclays Bank v Caplan and Another (1997) The Times, December 12. DAMAGES Damages are not available for undue influence, but if a bank has broken a duty of care to a wife-surety damages may be available in negligence under Hedley Byrne v Heller (1964). See also, Royal Bank of Scotland v Etridge (No 2) [1998] 4 All ER 705, note 8 at p706: solicitor owes a duty of care to the wife UNDUE INFLUENCE AND THIRD PARTIES Undue influence is now regularly invoked by wife-sureties where their relationship with the bank-creditor is manipulated when the debtor-husband acts as intermediary. For example, a husband persuading his wife to guarantee his company's overdraft with a bank, using the matrimonial home, of which she is joint owner, as security for the debt. In such situations the creditor may be 'tainted' by the undue influence of the intermediary. If a bank entrusts certain duties to a debtor-husband who, as intermediary, is capable of exerting some influence over his wife, the position is as follows: 1. If the transaction is one which is (a) on its face not to the financial advantage of the party seeking to set it aside, and (b) if there is a substantial risk of its having been obtained by undue influence, then the third party will have constructive notice of undue influence giving the right to set aside the transaction. The creditor must take reasonable steps to ensure that the wife's consent was properly obtained. See: Barclays Bank v O'Brien [1993] 4 All ER 417. ...read more.