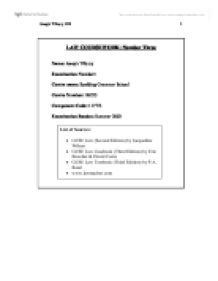 LAW COURSEWORK: Number Three Name: Joseph Tilbury Examination Number: Centre name: Spalding Grammar School Centre Number: 26233 Component Code: 1177/3 Examination Session: Summer 2003 I. Using actual situations, describe the elements of actus reus and mens rea in criminal law. It is necessary for the prosecution, in the bulk of crimes, to prove two elements in order for a person to be found guilty of a crime. These are the actus reus (which means the guilty act) and the mens rea (which means the guilty mind/intention), and it is only in strict liability crimes where the act alone (the mens rea) is enough to prove a person guilty. Examples of strict liability crimes are possession offences (the defendant possesses, for example, knives, guns or drugs) and not wearing a seatbelt. The actus reus can be an act (e.g. stabbing someone) or an omission (e.g. not halting at a red light), whilst the mens rea can be caused by intention (this level must be proved for the most serious crimes including theft, burglary, robbery, murder) or recklessness (taking an unjustifiable risk, this level must be proved in crimes including assault and battery). It is easiest for me to describe the elements of a crime by utilising real cases and offences. I must first however explain the chain of causation, which is where there is an intervening act between the defendant's guilty act and the consequence, which contributes to the consequence. ...read more.

The mens rea for involuntary manslaughter is where the accused did not have the specific intention for murder. We can therefore see that the critical difference to distinguish murder from manslaughter is the mens rea element; whether the defendant intended to kill or cause grievous bodily harm or not, or if they intended to kill or cause grievous bodily harm, but only because of an abnormality of mind, due to provocation or if they had the settled intention to die when they caused the other person's death. The distinction between murder and manslaughter is therefore hinged on the killer's state of mind. For example, in R. v. Thornton (1995) the defendant was a 'battered wife' who killed her husband by stabbing him when he was asleep. The Court of Appeal ordered a re-trial, as the jury in the original case had not been allowed to consider the effect of the 'battered wife syndrome' on her reaction to the final incident. She had the actus reus of murder, the unlawful killing of a person, but was found guilty of voluntary manslaughter due to provocation. This is important as the judge can inflict a lesser sentence than life (which is the automatic sentence for murder), if he thinks suitable, if the defendant is found guilty of manslaughter. In conclusion, I feel that due to the fact that the actus reus is the same in murder and manslaughter, the mens rea is the essential element of the crime as it is this which distinguishes the killer's state of mind and ultimately if the defendant committed murder or manslaughter. 1 Joseph Tilbury 11B ...read more.