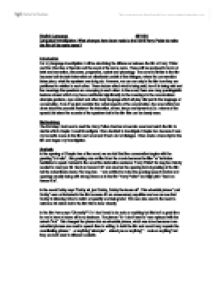 What changes have been made to the novel Harry Potter to make the film of the same name?

English Language 26/11/04 Language Investigation: What changes have been made to the novel Harry Potter to make the film of the same name? Introduction For my language investigation I will be examining the difference between the film of Harry Potter and the Chamber of Secrets and the novel of the same name. These will be analysed in terms of lexis and semantics, discourse, pragmatics, syntax and phonology. The novel is similar to the film because both include information on situational context of the dialogue, where the conversation takes place, what the speakers are doing etc. However, we can see only in the film how they are positioned in relation to each other. These factors affect what is being said, how it is being said and the meanings the speakers are conveying to each other. In the novel, there are many paralinguistic features absent which may have contributed significantly to the meanings in the conversations example gestures, eye contact and other body language which all play vital part in the language of conversation. Even if we just consider the verbal aspects of the conversation, the novel offers few clues about the prosodic features- the intonation, stress, tempo and dynamics (i.e. volume of the speech) let alone the accents of the speakers but in the film this can be clearly seen. Methodology The first step I took was to read the Harry Potter chamber of secrets novel and watch the film to decide which chapter I would investigate. ...read more.

However in the film Dobby thought it was a question because Harry used a questioning tone of voice. In the novel Dobby shook his head and said "That was an awful thing to say" however in the film there is an addition of another sentence "No, I haven't." This is the first time in speech that we see Dobby replacing his name with the firstt person singular subject pronoun "I". Because in both film and novel Dobby constantly refers to himself as "Dobby" instead of using first person pronouns because it sounds more formal and traditional and he always remains the subject of the sentence examples include "...Dobby understands..." "Offend Dobby..." "Dobby has heard..." In the film Dobby says "The wizard family Dobby serves Sir. Dobby is bound to serve one family forever" But in the novel he says "Dobby is a house-elf bound to serve one house and one family forever." This sentence was changed into two sentences in the film and the word order was changed from passive voice to active voice. Active voice is used in the novel because it makes reading easier. Dobby keeps referring to Harry Potter as "Sir", this is because it's the first time they are meeting and shows politeness and respect as they both have different status; Dobby is a house elf whereas Harry is a wizard. The compound noun "house-elf" was used has connotations of servants. In the novel "But Dobby has come to protect Harry Potter, to warn him" was changed to "If they ever knew ...read more.

shows hesitation in speech and shows that the speech is spontaneous and not planned as in a novel. In the novel Harry asks, "Have you been stopping my letters" but in the film this sentence is omitted because there's no need to say this as the viewers can deduce that Dobby has been stopping Harry Potters letters. In the film Harry uses the imperative sentence "Give me those now!" Dobby replies, "No" instead of saying, "Give me my friends letter" which was used in the novel. The demonstrative pronoun "those" was used as a deixis in the film to refer to the letters, which were part of the context in which the words were spoken. There was also the addition of Dobby's reply in the film, "No" which is a directing exchange as there was an initiation (command) followed by a response. Throughout the conversation type of turn taking used between Dobby and Harry is smooth speaker switch because both Harry and Dobby follows the maxims of HP Grice. In the film Dobby says "Harry Potter mustn't be angry with Dobby. Dobby hoped that if Harry Potter thought his friends had forgotten him...Harry Potter might not want to go back to school sir" In the novel the prepositional phrase "...with Dobby" is omitted and instead there was a pause which indicated Dobby wanted Harry to speak but because Harry didn't speak Dobby continued. The use of the negative form of the deontic modal auxiliary "can't" was used to strengthen the command. Also the use of the epistemic modal auxiliary verb "might not" indicates that Dobby isn't sure if Harry Potter might go back to school. ...read more.