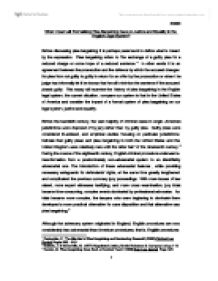 What Impact will Formalising Plea Bargaining have on Justice and Equality in the English Legal System?

What Impact will Formalising Plea Bargaining have on Justice and Equality in the English Legal System? Before discussing plea bargaining it is perhaps paramount to define what is meant by the expression. Plea bargaining refers to 'the exchange of a guilty plea for a reduced charge or some hope of a reduced sentence.'1 In other words it is an agreement between the prosecution and the defence by which the accused changes his plea from not guilty to guilty in return for an offer by the prosecution or when the judge has informally let it be known that he will minimize the sentence if the accused pleads guilty. This essay will examine the history of plea bargaining in the English legal system, the current situation, compare our system to that in the United States of America and consider the impact of a formal system of plea bargaining on our legal system, justice and equality. Before the twentieth century, the vast majority of criminal cases in Anglo-American jurisdictions were disposed of by jury rather than by guilty plea. Guilty pleas were considered ill-advised, and empirical studies focusing on particular jurisdictions indicate that guilty pleas and plea bargaining in both the United States and the United Kingdom were relatively rare until the latter half of the nineteenth century.2 During the course of the eighteenth century, English criminal procedure underwent a transformation from a predominately non-adversarial system to an identifiably adversarial one. The introduction of these adversarial features, while providing necessary safeguards for defendants' rights, at the same time greatly lengthened and complicated the previous summary jury proceedings. With more issues of law raised, more expert witnesses testifying, and more cross-examination, jury trials became time-consuming, complex events dominated by professional advocates. As trials became more complex, the lawyers who were beginning to dominate them developed a more practical alternative for case disposition and that alternative was plea bargaining.3 Although the adversary system originated in England, English procedures are now considerably less adversarial than American procedures, that is, English procedures are simpler, straightforward and more efficient. ...read more.

The Government did not follow the recommendations made by the Royal Commission but did introduce section 48 of the Criminal Justice and Public Order Act 1994, now section 152 of the consolidating Powers of Criminal Courts (Sentencing) Act 2000, as discussed previously. As a result, Lord Justice Auld was asked by the Lord Chancellor to review the criminal courts in England and Wales.13 One of the areas he was required to reassess was whether a formal discounting system of early pleas should be introduced and whether or not plea bargaining should be permitted.14 Lord Justice Auld believed that advance indication of sentence would benefit defendants and witnesses alike. He proposed a system of graduated discounts where the defendant would be given a greater reduction for an earlier plea. Safeguards would be introduced to ensure that a defendant was not put under any pressure and did not plead guilty without legal advice. The idea of lower sentences for guilty pleas has been criticised by Professor Andrew Ashworth of Oxford University.15 He and other academics say it gives defendants a benefit they do not deserve, because a plea of guilty does not reduce the offender's culpability or need for imprisonment. It must also be contrary to the presumption of innocence to impose a heavier penalty on a defendant who requires the prosecution to establish his guilt, they say. Worst of all, perhaps, the incentive may put pressure on a defendant who expects he will be convicted anyway to admit a crime he has not committed. No discount is given for a plea of guilty in Scotland, where it would be regarded as an improper inducement. If a formalised system of plea bargaining was introduced into the English legal system it would ultimately lead to overcharging by the police and prosecution. It is all too easy for police and prosecution to overload the defendants' charge sheet to pressurise defendants to plead guilty to some charges in return for the excess charges to be dropped. ...read more.