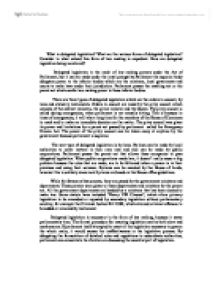 What is delegated legislation? What are the various forms of delegated legislation? Consider to what extend this form of law making is expedient. How are delegated legislation being monitored? Delegated legislation is the result of law making powers under the Act of Parliament, but it can be made under the royal perogative.Parliament the superior body delegates power to the inferior bodies which are the ministers, local goverments and courts to make laws under their jurisdiction. Parliament passes the enabling act or the parent act which confer law making power to these inferior bodies. There are three types of delegated legislation which are the orders in council, by laws and statutory instruments. Orders in council are made by the privy council which consists of the cabinet ministers, the prime minister and the Queen. The privy council is called during emergencies, when parliament is not actually sitting. This is because in times of emergencies, it will take a long time for the members of the House of Commons to reach and to make an immediate decision on the matter. The privy council was given its power and limitations by a parent act passed by parliament called the Emergency Powers Act. ...read more.

These are mostly concerned with the health provision and welfare benefits. By delegating power to the relevant minister to introduce new measures to deal with unforseen situations that may arise. Parliament avoids the need for amending legislation to be enacted and thus enhances both the speed and flexibility of the legislative process. Delegated legislation can be put into action quickly and if it proves to be ineffective, then it can be revoked. Technical content is also the reason why delegated legislation is necessary. Few members of parliament have expert knowledge necessary effectively to scrutinise highly technical legislation. It may be more effective to leave such legislation to be made by appropriate minister in consultation with his expert advisers and other interested parties, with the relevant areas. Thus procedure also avoids acts of parliament from becoming a mass of highly complex and unintelligible detail. On the other hand, delegated legislation is not a necessary law making process. Sub-delegation may take place, as subordinate legislation is sometimes made by people who are unauthorised or unnamed person which the power was not delegated to them to do so. It also reflects a lack of democratic involvement because through delegated legislation, it is made by civil servants other than those ministers who are elected. ...read more.

Beside parliament, delegated legislation can also be controlled by judicial review. Delegated legislation may be reviewed by the courts and where necessary may be declared invalid. Accordingly, and in the absence of any express exclusion in the parent statute, the doctrine of ultra vires will operate so as to contain the making of subordinate legislation within its legal bounds. There are two grounds upon which the courts can declare delegated legislation to be void, there are procedural ground and substantive ground. For procedural grounds, the instrument is invalid because the minister has failed to follow the procedure laid by the enabling act. In Agricultural, Horticultural and Forestry Training Board v Aylesbury Mushrooms Ltd 1972, failure to comply with a statutory requirement as to consultation resulted in the order being declared invalid. While for the substantive ground, the subordinate body has made law beyond their jurisdiction, and this will cause the delegated legislation to be void. When this happened the subordinate body must re-draf the law. Hence, by choosing delegated legislation, it is an applicable system that works well in our system today. It is the choice of two evil, and by choosing delegated legislation, it is the lesser evil. ...read more.