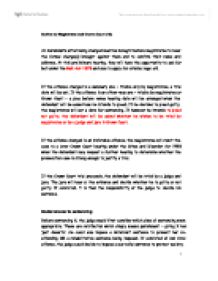 What is the procedure for bail and sentencing after a criminals charge?

Outline to Magistrates and Crown Court (10) All defendants after being charged must be brought before magistrates to hear the formal charge(s) brought against them and to confirm their name and address, At this preliminary hearing, they will have the opportunity to ask for bail under the Bail Act 1976 and also to apply for criminal legal aid. If the offence charged is a summary one - triable only by magistrates, a trial date will be set. If the offence is an either-way one - triable by magistrates or Crown Court - a plea before venue hearing date will be arranged when the defendant will be asked how he intends to plead. If he decides to plead guilty, the magistrates will set a date for sentencing. ...read more.

If convicted, it is then the responsibility of the judge to decide his sentence. Model answer to sentencing Before sentencing X, the judge would first consider which aims of sentencing were appropriate. These are retribution which simply means punishment - giving X her 'just deserts'. He could also impose a deterrent sentence to prevent her re-offending OR a rehabilitative sentence being imposed. If convicted of non fatal offence, the judge could decide to impose a custodial sentence to protect society. The range of sentences cover four main types - custodial, community, financial and discharges. Under the Powers of Criminal Courts (Sentencing) Act 2000 there are 3 types of custodial sentences. ...read more.

Finally, the lowest form of sentencing is a Discharge, either absolute where X would be completely freed by the court, or conditional which means that she would be sentenced if she committed another offence within a period not greater than 3 years from the original offence. Before deciding on the actual sentence, the judge would consider both aggravating and mitigating factors. Aggravating are those which would tend to result in a heavier sentence and include - use of weapon, def had previous convictions s. 143 CJA 2003 or Racially or religiously aggravated s. 145 CJA 2003 and the offence was premeditated Mitigating factors would 'lighten' the sentence and include - early guilty plea, 1/3 of the sentence is reduced, Genuine remorse, Youth and maturity of the def or the Def' family responsibilities ?? ?? ?? ?? 1 ...read more.