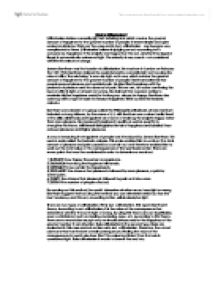 What is Utilitarianism? Utilitarianism defines a morally right act as being one, which creates the greatest amount of happiness for the greatest number of people. It seems simple and quite understandable but this is not the case and in fact, utilitarianism can become very complicated at times. Utilitarianists believe in judging an act according to it's outcome i.e. happiness. If the majority are happy then the act, whether it be legal or illegal, is automatically redeemed right. The minority in any case is not considered whether it is minute or a large. Jeremy Bentham was the founder of utilitarianism. He was born in London on February the 15th 1748. Bentham claimed he could determine a morally right act by using the rules of utility. ...read more.

This is called the hedonic calculus. Bentham was a leader of a group called the Philosophical Radicals, whose members included a strong follower, by the name of J.S. Mill. Bentham was a close family friend of the Mills. Mill introduced happiness as a factor of making the majority happy rather than mere pleasure. He measured happiness in quality as well as quantity to strengthen his theory. Mill himself distinguished levels of happiness and labelled them as lower pleasures and higher pleasures. A way of measuring the happiness of people was introduced by Jeremy Bentham. He used a scale called the hedonic calculus. This scale enabled him to work out the total amount of pleasure and pain caused by a certain act and therefore enabled him to work out the total value of the consequences of that particular action. ...read more.