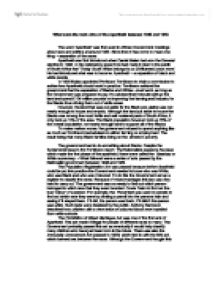 What were the main aims of the Apartheid between 1948 and 1953 The word `Apartheid' was first used in African Government meetings about race and politics at around 1930. Since then it has come to mean one thing - separation of the races. Apartheid was first introduced when Daniel Malan had won the General election in 1948. In his celebratory speech he had made it clear to the public of South Africa that `Today South Africa belongs to us [Afrikaners] once more'. He had introduced what was to become Apartheid - a separation of black and white people. In 1950 Malan appointed Professor Tomlinson to chair a commission to advise how Apartheid should work in practice. Tomlinson advised the government that the separation of Blacks and Whites could work, as long as the Government was prepared to pay. He advised that it should split up the land and spend �104 million pounds on improving the farming and industry for the Blacks thus driving them out of white areas. However, the land that was put aside for the Black population was not nearly enough to house and employ. ...read more.

For example, the Pencil test was used on people to find out which race they were by sticking a pencil into the persons hair and seeing if it stayed there. If it did, the person was black; if it didn't the person was white. Such tests were despised by the public, Anthony Sampson described how children with a mere trace of coloured blood were expelled from white schools. The Prohibition of Mixed Marriages Act was one of the first acts of Apartheid. This act made it illegal for people of different races to marry. The Government probably passed this act as eventually it would help classify many children who have just been born in the future. There was also the Immorality Amendment Act (passed in 1950) which tied in with the MM act, which banned s*x between the races. Although the Government thought this would make classification easier in the future, both Whites and Blacks disliked this law and `illegal' s*x did go on unseen. The next important Act passed by the Government was the Group Areas Act which gave the Government the right to declare certain `areas' for Whites only and move blacks out, if they liked it or not. ...read more.

Black schools had to provide totally different education courses for Blacks than the Whites, and instead of being taught in English the children were taught in their Ethnic language. In one sense teaching the children in their native language sounds good, because it preserves the language and the identity for the future. On the other hand, however, the failure to ensure that the Blacks learnt English had the result that the Blacks moved further away from the mainstream of society in South Africa where the predominant language WAS English. In 1948 the position was this: Black people had a relativly free life and could move around their country as the Whites did. By 1953 the Black people were `demoted' in life. They could not move without revealing all there personal details to an officer, they were not allowed to marry White or indeed have s*x with a White AND they were not taught in the same quality as whites (they were taught different courses in their OWN language). By 1955 the position had got worse. The effect of Tomlinson's report was not only further demoting the whole of the Black population to a position far below the Whites but was also destroying the rights that Blacks had previously enjoyed. ...read more.