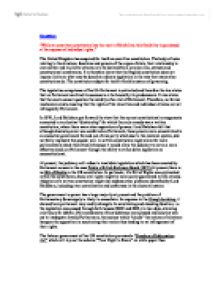 &quot;While an unwritten constitution has the merit of flexibility, this flexibility is purchased at the expense of individual rights.&quot; - Discuss

Question: "While an unwritten constitution has the merit of flexibility, this flexibility is purchased at the expense of individual rights." The United Kingdom has acquired for itself an unwritten constitution. The body of rules relating to the structure, functions and powers of the organ of state, their relationship to one another and to private citizens is to be derived from common law, statutes and constitutional conventions. It is therefore learnt that the English constitution does not impose limits on what may be done by ordinary legislation in the way that many other constitutions do. The constitution adapts for itself a flexible system of governing. The legislative competence of the Uk Parliament is unlimited and therefore the law states that no Parliament can bind its successors or be bound by its predecessors. It also states that the courts cannot question the validity of an Act of Parliament. Therefore, no formal mechanism exists ensuring that the rights of the minorities and individual citizens are not infringed by Parliament. ...read more.

The Labour government of the UK constitution promised a "Freedom of Information Act" which will lay out the scheme "Your Right to Know" on white paper thus representing a strong assult upon official secrecy allowing more rights to be extended to individuals. It could also be pointed out that the freedom of the media is in any event hampered by the laws of the libel, contempt, official secrets and particularly by the action for breach of confidence as seen in the case Attorney General v Newspaper Publishing plc (1987). The use of an interim injunction to preserve confidentiality combined with the extension of the law of contempt represented the most worry curb on the media's freedom. Traditionally,the operation of a free and diverse press has offered a further check to government power but without a Freedom of Information Act, the press is dependant on a system of official and unofficial "leaks". There is a "danger" that certain organs of the press will merely peddle up in different form to suit the different markets. ...read more.

This problem has however been addressed through the enactment of the Human Rights Act 1998. Litigants will now be able to assert their convention rights against any public authority in any and every UK courts and tribunals. The HRA will make it unlawful for a public authority to do ant act which is incompatible with the convention rights, unless legislation unambiguously mandates or authorizes such actions. (Section6). All Legislation will have to be read so far as possible to compatible with the convention rights. There is no doubt that this act will therefore represent a very real and substantial limitation upon Executive (Parliamentary) action. In conclusion, while it may be argued that many of the traditional means of curbing government power and parliamentary sovereignty may seem ineffective in a flexible form of constitution like the UK, the Human Rights Act and the EC Act will likely constitute a new and powerful guarantee against an oppressive form of government where flexibility is "purchased" at the expense of individual rights. The objects to the un-entrenched British Constitution will however be practically evident only with a new constitution. ...read more.