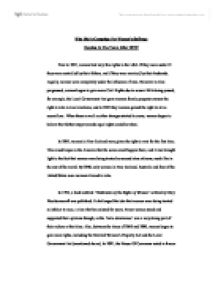 Why Did A Campaign For Women's Suffrage Develop In The Years After 1870?

Why Did A Campaign For Women's Suffrage Develop In The Years After 1870? Prior to 1857, women had very few rights in the USA. If they were under 21 they were controlled by their fathers, and if they were married, by their husbands. Legally, women were completely under the influence of men. However as time progressed, women began to gain more Civil Rights due to several Bills being passed, for example, the Local Government Act gave women female property owners the right to vote in local elections, and in 1907 they women gained the right to sit as councillors . When these as well as other changes started to occur, women began to believe that further steps towards equal rights could be taken. ...read more.

Fewer women stood and supported their opinions though, as the 'male-dominance' was a very strong part of their culture at that time. Also, between the times of 1860 and 1890, women began to gain more rights, including the Married Women's Property Act and the Local Government Act (mentioned above). In 1897, the House Of Commons voted in favour of a Bill supporting votes for women, although this was not passed until many years later, it suggested that equal voting was achievable. Social standings for women had greatly improved by 1900, as they were now able to vote in local elections if they were property owners, and they were not subjected totally to their husbands. ...read more.

Because such strong, male, respected figures were supporting womens rights, many believed that the idea of equal rights was feasible, and continued their quest for the Civil Rights Bill that would declare them that. Eventually, in 1907, this Bill was passed, giving women the right to vote. This is by far the strongest point in the Women Suffragette cause. Women had no trouble in convincing other women that they deserved equal rights, but to have strong, male figured supporting them as well made people take notice in their cause. Also, as women needed male interest in their cause, as they needed their votes to give them their Civil Rights, something that should've been declared long ago in the 'Land Of The Free'. ...read more.