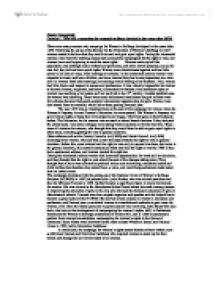 History Coursework Question 1. Why did a campaign for women's suffrage develop in the years after 1870? There were many reasons why campaign for Women's Suffrage developed in the years after 1870. Following the set up of the Society for the Promotion of Women's Suffrage in 1867 women started to believe that they could succeed and gain equal rights. During the nineteenth century, men from the working classes had successfully campaigned for the right to vote, and women were now beginning to seek the same rights. Women made up half the population, and although many worked and paid taxes, and some owned property, just as the men did, they did not have equal rights. Women were discriminated against and had little power in all sorts of ways, from marriage to industry. ...read more.

The Women's Property Act gave women rights to keep their own property and wages, which had gone to their husbands before. The Education Act let women vote or stand in school board elections if they had paid the school rates. Also some colleges were letting women students in for the first time. These were all victories for women, who thought that they would then be able to gain equal rights in other areas, including getting the vote in general elections. Other reforms such as the County Councils Act [1880] and Parish Council Act [1894] encouraged the women, who saw this as the first steps towards the right to vote in general elections. Before this, most women had the right to vote only in general elections, but never in the general elections, this seemed nonsensical Most men had the right to vote by 1900 if they had a permanent address, and women wanted this right too. ...read more.

Fawcett was also a superb organiser and speaker and this helped her to become a great leader of the NUWSS. She too had a keen interest in women's education and profession, and Fawcett was a committed woman to constitutional methods to gain votes for women, even when the liberal party and Asquith seemed very unwilling. John Stuart Mill also had a vital role in the development of campaigning for women's rights. Mill, in Parliament introduced the Women's Suffrage amendment to Reform Bill, and in 1866 he presented a petition from women householders, campaigning for women's rights in the House of Commons. Such efforts were followed by the more militant Women's Social and Political Union in 1903, led by Emmeline Pankhurst. In conclusion, the campaign for women's rights started thanks to brave woken such as Millicent Fawcett and Emmiline Pankhurst who inspired women to stand up for their beliefs and change the law for the better of all women. ...read more.