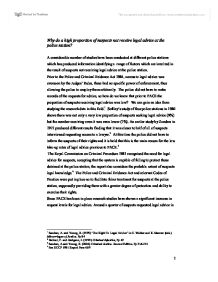 Why do a high proportion of suspects not receive legal advice at the police station?

to stop suspects exercising their rights at the police station, thus accounting for a large proportion of cases where detainees do not receive legal advice. There are, however, reason that explain the request rates for legal advice which do not rest entirely on the police's assistance or hindrance. Brown et al.'s study in 1992 suggests that suspects request neither to see nor speak to solicitor 'because they are not informed (wholly or partly) of their rights'.11 If a suspect is not informed of their rights it is acceptable to say most will be ignorant of their entitlement to legal advice. Even if suspects were partly informed the likelihood of the detainee questioning the police to reiterate their rights is low, as 'most will be frightened and apprehensive' being held involuntarily in unfamiliar surroundings.12 This leads on to another influencing factor; suspects being desperate to leave the police station. The thought of delaying their departure to wait for a solicitor to arrive, it seems, plays a major part in the number declining legal advice.13 Sanders et al. found numerous different responses from detainees when an officer asked if they wanted a solicitor, including, 'well it depends how long I'm here for..', which displays how unsure suspects can be feeling at the time of interviewing, they believe that ...read more.

them to intervene or to raise some objection', also their was cases of the solicitor acting almost as a third interviewer.21 Not only this but there are cases where confession is encouraged by solicitors over the phone and in the interview room. Also there are cases when junior members of the legal profession are employed to mete out advice even though their experience is unmatched to that of a police officer.22 These actions of the legal profession are likely to deter suspects from accepting legal advice when they weigh up the cost and benefits. Suspects should be encouraged to contact their own solicitor, should they have one, so they are dealing with a familiar person. In conclusion, it is evident that there are a broad range of reasons why suspects do not receive legal advice at police stations. These range from individual detainee's viewpoints to unlawful police practices. However, it is true that the number of suspects receiving advice has risen considerably since the introduction of PACE, as well as introducing further guidelines to prevent police from 'getting around' the rules, the question that should be posed is, 'Does every suspect actually need advice?'. As long as suspects are making informed decisions there are certainly plenty of cases where advice is not in their best interests. ...read more.