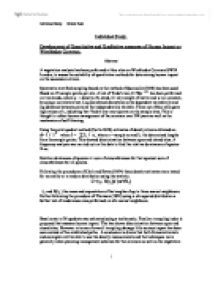 Development of Quantitative and Qualitative measures of Human Impact on Wimbledon Common.

Development of Quantitative and Qualitative measures of Human Impact on WimbledonCommon.

A vegetation analysis has been performed at four sites on Wimbledon Common SW19 London, to assess the suitability of quantitative methods for determining human impact on the succession climax.

Based on 25 sample points per site. A test of Yoda’s law; C=Wρ –3/2  has been performed on tree stands, where ρ  = density of a stand, C= dry weight of matter and w is a constant, by using a correlation test. Log (combined diameters) as the dependent variable (y) and log (distance between pairs) as the independent (x) variable. Three out of four sites gave high values of r, indicating that Yoda’s law may operate on the sample sites. This is thought to reflect human management of the common over 200 years as well as the mechanism of self-thinning.

Using the point quadrat method (Curtis 1949) estimates of density d were obtained as:

d= 1 /  l 2    where l =   ∑ li   /  n , where n = sample no and l i the determined lengths from the sample points. This showed discrimination between open and closed sites. A frequency analysis was carried out on this data to find the relative dominance of species X as:

Following the procedures of Clark and Evans (1954) these density estimates were tested for normality or a random distribution using the statistic:

rn and E(rn ) the mean and expectation of the lengths of up to three nearest neighbours.

Further following the procedure of Thomson (1956) using a chi squared distribution a further test of randomness was performed on nth nearest neighbours.

The original results are presented as carried out in the field. These have been copied onto an excel spreadsheet for analysis and converted where appropriate into SI units.

To Rajan, For assisting in Data Recording on Wimbledon Common.

[2] Density is the measure of number per unit area.

[3] Cover is defined as the proportion of ground occupied by perpendicular projection on to it of the aerial parts of individuals of the species under consideration.