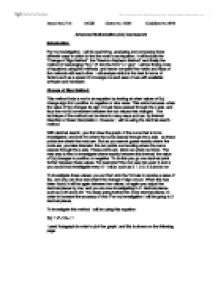 Examining, analysing and comparing three different ways in which to find the roots to an equation.

Advanced Mathematics (C3) Coursework Introduction: For my investigation, I will be examining, analysing and comparing three different ways in which to find the roots to an equation. It will include the "Change of Sign Method", the "Newton-Raphson Method" and finally the method of rearranging "f(x) = 0" into the form "x = g(x)". I will be finding roots of equations using the methods, and hence compare the merits and flaws of the methods with each other. I will analyse which is the best in terms of factors such as a speed of convergence and ease of use with available software and hardware. Change of Sign Method: This method finds a root to an equation by looking at when values of f(x) change sign from positive to negative or vice versa. This works because when the value of f(x) changes its sign, it must have passed through the x axis, and thus the root is somewhere between the two values that changed. The technique of the method can be done in many ways such as by interval bisection or linear interpolation. However, I will be using the decimal search method. With decimal search, you first draw the graph of the curve that is to be investigated, and look for where the curve passes through the x axis, as these points are where the roots are. But as you cannot guess exactly where the roots are, you take intervals: the two points surrounding where the curve passes through the x axis. These points are taken as whole numbers. The next step is then to investigate where exactly between this interval, the value of f(x) changes to positive, or negative. To do this you go one decimal point further between these values. For example if the root was between 3 and 4, you would now investigate every 0.1 value, such as 3.1, 3.2, 3.3 and so on. ...read more.

Comparison of Speed of Convergence: The speed of convergence for the Newton-Raphson was much faster than that of the Rearranging Method. This is because by finding the tangent to the curve each time, it is getting closer to the root of the equation faster, rather than finding the points of intersection between the curve y = g(x) and y =x, as that takes more iterations in order to reach the root. For the equation, it took the Newton-Raphson method only 5 steps to reach the answer, whereas it took the Rearranging Method 11 steps, thus over twice as slow. However, both of these methods are faster than that of the Change of Sign method, as for that you must examine a huge amount of values of x in order to find where the sign changes, and it takes a very long time to find the root to the same amount of accuracy as the rest. The actual number of calculations needed was 132, compared to that of 5 and 11 steps for the other methods, makes it a very tedious method. Comparison of Ease of Use with Available Software and Hardware: The Rearranging Method and Newton-Raphson Method are relatively similar in their demands for software and hardware, as they both require a machine and software that is able to plot graphs, so that the roots can be spotted and fixed point estimations can be made. The Change of Sign Method however, does not require this as it can simply see when the sign changes and thus discover the roots. The iterations of the Newton Raphson Method and Rearranging Method can be calculated via easy formulas in a spreadsheet program such as Excel, though they require no more hardware or software than that of the Change of Sign method, which also uses simple spreadsheet formulas to calculate the value of f(x). However, the Change of Sign method does require more hard disk space as the calculations can be very large at times in comparison with the other methods. Daniel Hoij 13.6 DCGS Centre No. 52205 Candidate No. 8670 ...read more.