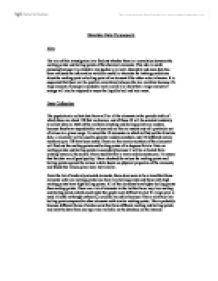 Find out whether there is a correlation between the melting points and boiling points of the chemical elements.

The aim of this investigation is to find out whether there is a correlation between the melting points and boiling points of the chemical elements. This idea is worth pursuing because it is related to my studies in A level chemistry and once data has been analysed the information would be useful to chemists for making predictions about the melting point or boiling point of an element if the other value is known. It is suspected that there will be positive correlation between the two variables because if a large amount of energy is needed to melt a solid it is likely that a large amount of energy will also be required to cause the liquid to boil and vice versa.

The population to collect data from will be all the elements in the periodic table of which there are about 118 that are known, and of these 50 will be selected randomly to collect data on. Both of the variables (melting and boiling point) are random, because they have unpredictable values and are free to assume any of a particular set of values in a given range. To select the 50 elements

Sxy is the sample covariance and can be calculated using:

where x is the melting point and y is the boiling point. A spreadsheet has been used to calculate each total.

Sxx is a measure of the total square spread of the x values (melting points):

Syy is a measure of the total square spread of y values (boiling points):

r can then be calculated:

Since the correlation coefficient is 0.879, which is close to 1, there must be quite a strong positive correlation between the melting points and boiling points of the elements used in this sample.

To test whether the level of correlation calculated between the two variables is significant, a hypothesis test will be carried out.

The main restriction of the findings are that although there is positive correlation between the two variables, there is no causation between melting points and boiling points so there must be some other factor in the structure of each element that determines these properties.

To improve the quality of results, a greater sample size should be used consisting of more elements, and the melting and boiling points could be found out more accurately from more reliable sources. This would make sure that the value of r calculated is more reliable. If a smaller significance level was used it would be possible to be more certain about whether there really is a positive correlation between melting and boiling points. So that predictions could be made about one variable if the other is known, a least squares regression line would need to be calculated to express the linear correlation algebraically.