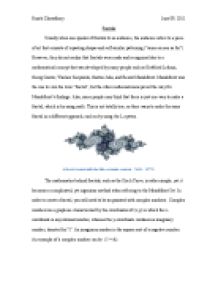 Fractals. In order to create a fractal, you will need to be acquainted with complex numbers. Complex numbers on a graph are characterized by the coordinates of (x,y)

Usually when one speaks of fractals to an audience, the audience refers to a piece of art that consists of repeating shapes and self-similar patterning (“same as near as far”). However, they do not realize that fractals were made and recognized due to a mathematical concept that was developed by many people such as Gottfried Leibniz, Georg Cantor, Waclaw Sierpiński, Gaston Julia, and Benoit Mandelbrot. Mandelbrot was the one to coin the term “fractal”, but the other mathematicians paved the way for Mandelbrot’s findings. Also, some people may think that there is just one way to make a fractal, which is by using math. This is not totally true, as there ways to make the same fractal in a different approach, such as by using the L-system. 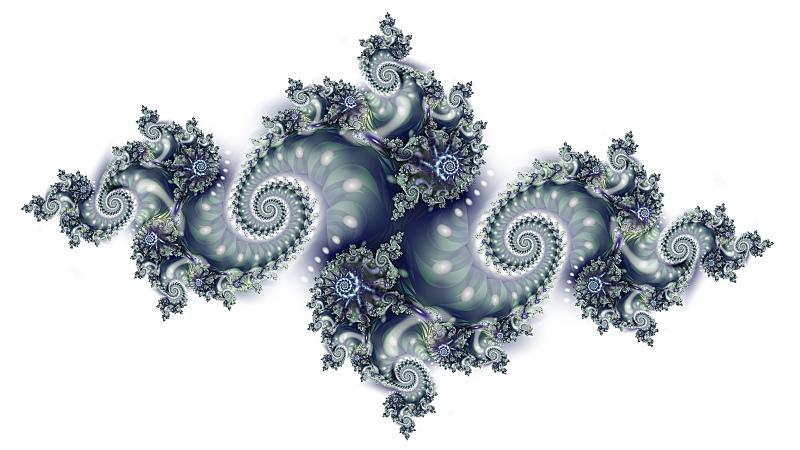 The mathematics behind fractals, such as the Koch Curve, is rather simple, yet it becomes a complicated, yet ingenious method when referring to the Mandelbrot Set. In order to create a fractal, you will need to be acquainted with complex numbers.  Complex numbers on a graph are characterized by the coordinates of (x,y) in which the x-coordinate is any rational number, whereas the y-coordinate contains an imaginary number, denoted by “i”. An imaginary number is the square root of a negative number. An example of a complex number can be: (5 + 4i).

z2 + z0 ever lands outside of the circle of radius 2 centered at the origin, then this orbit definitely tends to infinity. Therefore, 2i does not exist in the Mandelbrot since it quickly leaves the boundary after only one iteration:

Enough of whole numbers, the Mandelbrot Set requires the use of fractions for the values of the real and imaginary parts, or else we’d only be talking about a few points. For example, the iteration of .7 + 6i is not considered a point in the Mandelbrot Set only after three iterations:

Usually, smaller fractions for the complex and imaginary parts tend to stay in the Mandelbrot Set, even after fifty iterations! For example, when iterating .2 + .3i , it stays inside the circle of radius 2:

In order to create the Mandelbrot Fractal, we just ask the computer to color the pixels black if the value of c is bounded; else we color the pixel white if it goes to infinity. Different colors were determined by the quickness of the equation to go until infinity, thus the presence of blue in the image below. 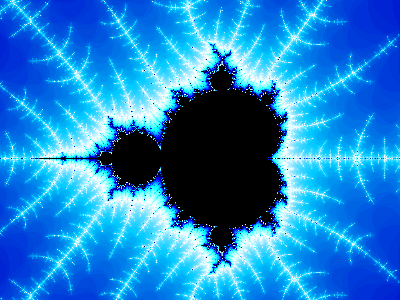 Fractal created by the Mandelbrot Set

French mathematician Gaston Julia had published her work at the age of 25, yet it was not recognized as an input to the mathematical world until after about sixty years, when computers were able to visualize Julia’s creation.

The dimension of a square is two, and is proven below:

Similarly, to find the dimension of a fractal, we use the same formula. The Sierpińksi Triangle consists of three self-similar pieces under the magnification of two.